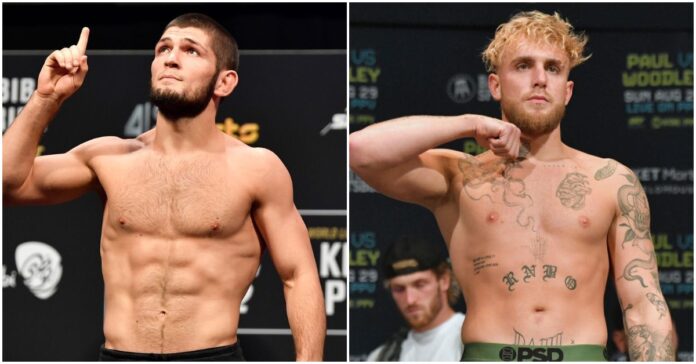 Jake Paul says that he is open to an MMA fight with Khabib Nurmagomedov but would have to be offered 25-35 million dollars for it.

Khabib and his MMA promotion Eagle FC, offered Paul an MMA fight in his promotion last week. UFC President Dana White has also not completely ruled out signing the Youtuber turned fighter. ‘The Problem Child’ is 5-0 in boxing with four of his wins coming by way of knockout.

Paul has been teasing a switch to MMA recently but has also said that it would take big money to get him to make the move. He spoke with Ariel Helwani on ‘The MMA Hour’ about the subject earlier this week. (H/T talksport.com)

“There is [interest to do MMA] and not in the near future but in the medium term. I would need to practice my kicks and a little more on the jiu-jitsu side for like two years, maybe two and a half years before I would do that. Unless the money was really right but no one’s brought anything to the table that’s interesting enough.”

Paul goes on to talk about the alleged offer Eagle FC made him.

“Khabib [Nurmagomedov] said, ‘We offered him a deal’ – it’s not true. They never offered me anything. Eagle FC has never even done an event. Not to hate on anything they’re doing but I would need more than what I make in boxing to risk going into MMA right now. People would have to come $25, $35 million dollars to just start the conversation with me.

“I would fight Khabib in MMA if they wanted to make that offer,” Paul added. “Cause that would be exciting. That would excite me, especially if I had more time to train.

“That would be a massive fight. Probably a million, 2 million pay-per-view buys and all I would have to do is work on my wrestling skills. Cause I could outstrike him standing up.”

The full interview with Jake Paul on ‘The MMA Hour’ is available below.

Do you want to see Jake Paul compete in MMA in the near future?