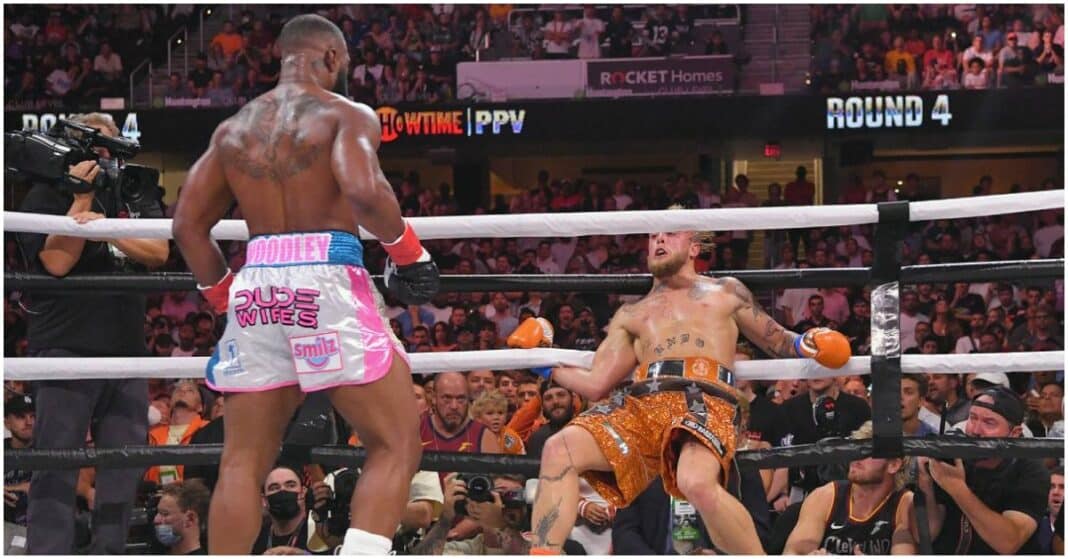 Jake Paul has finally addressed claims that he inserted a no knockout clause into the contract of his last opponent, Tyron Woodley.

‘The Problem Child’ stretched his perfect professional boxing record to 4-0 with a split decision win against the former UFC welterweight champion earlier this year. However, Paul did not have things all his own way in what was billed as and proved to be the toughest test of his short career.

Woodley landed a monstrous punch in the fourth frame that sent the social media celebrity tumbling into the ropes. Surprisingly, ‘The Chosen One’ refused to follow up and Paul was able to survive the round before boxing his way to a decision win.

Some fans suspected that the fight between Paul and Woodley was fixed. During a recent appearance on The MMA Hour, Dillon Danis provided some information that suggested those fans were right.

“Tyron Woodley, from what I heard, had it in the contract that he was not allowed to knock out Jake Paul,” Danis said. “I swear on anything he was against the ropes, I swear, that’s why when Jake Paul was against the ropes, Tyron Woodley didn’t hit him. I’m telling you right now. It was in his contract where it said you’re not allowed to knock him out.”

Ahead of his next fight which will be against Tommy Fury on December 18, Paul spoke with the media and addressed the claims made by Danis that have since been repeated by Claressa Shields.

“Look, it’s a bunch of losers trying to make sh*t up to get in the headlines,” Paul said. “And to get reporters like yourself to ask about that exact question and put their name into the mix so they can get a little bit of clout.

“Having a ‘no knockout clause’ in a contract – I’ve never heard of that. It’s highly illegal, I would be in jail. That’s like rigging a fight. I would be in prison if that was a real thing.

“It’s all nonsense, it’s all bullsh*t and they got exactly what they wanted out of it, which was for people to mention their name.” (Transcribed by TalkSport)

Do you believe Jake Paul? Or do you think he is really inserting no knockout clauses into his opponent’s fight contracts?