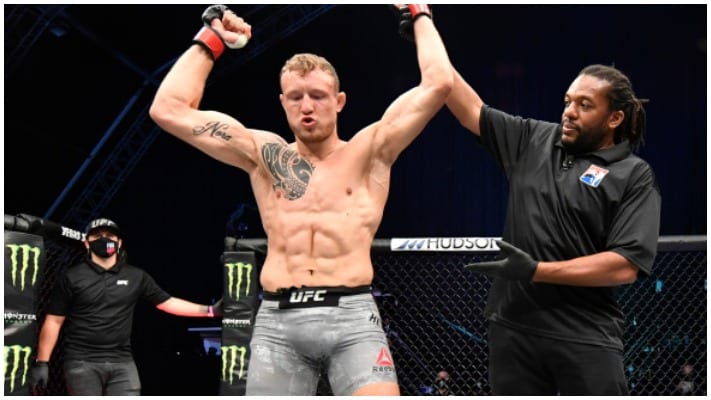 Jack Hermansson plans on making a statement next month.

Hermansson is set to take on short-notice opponent Kevin Holland in a middleweight bout in the UFC Vegas 16 headliner on December 5. “”The Joker” was originally slated to face Darren Till only for injury to rule out the Liverpool native.

And with as many as five ranked opponents turning him down, Hermansson ultimately decided to face the streaking but unranked Holland who is 4-0 in 2020.

Hermansson does rate Holland’s skills highly, but with three first-round submission wins in his last four victories, the Swede believes any fighter he gets to the ground is already on their way to losing.

This time, however, he plans on showcasing some ground and pound.

“He looks pretty technical, but at the same time, I gave a lot of black belts trouble, and I really, really believe in my skills, and I know that if I get him to the ground, he’s gonna have a rough day for sure,” Hermansson told MMA Junkie. “… I’m gonna go in there, I’m gonna go after him, and it’s gonna be a first-round finish.

“Probably ground and pound again, good ol’ ground and pound. I’m gonna remind the world what I can bring to the table. People have been watching some of my submission skills lately. It’s time to get those fists into action again.”

There is plenty of risk and little reward in facing Holland.

Hermansson acknowledges this — especially as he was in Holland’s position when he faced Jacare Souza last year — but ultimately believes if he is to become champion one day, he will have to eventually beat everyone in the division. That includes Holland.

“I’m really looking to make a statement and to show that I’m on the next level, and so that’s definitely my plan,” Hermansson added. “A loss would be devastating of course, but I’m willing to take that chance. I really believe I can be the best in the world and that I can beat Israel Adesanya, and to be ready to do that, I need to be ready to beat Kevin Holland, as well, so I’m not relying on having one lucky day out there.

How do you see this fight going?