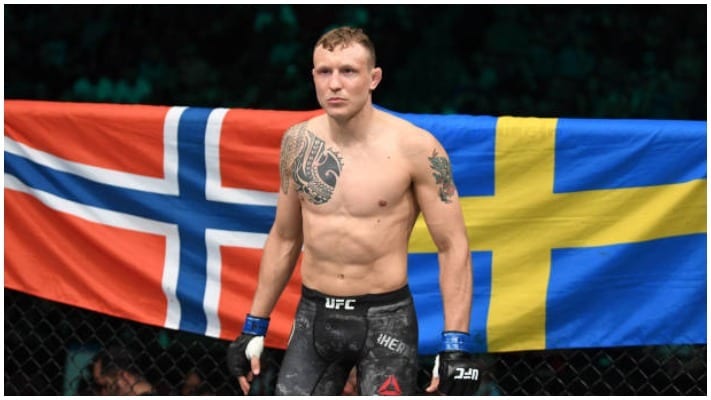 Jack Hermansson has claimed “at least five guys” turned down the chance to face him in a headline slot on December 5.

Hermansson was originally booked to face Darren Till on the card but the Englishman has been forced out due to an undisclosed injury. In steps Kevin Holland who is fresh off an impressive win at UFC Vegas 12 on October 31. The unranked middleweight prospect has secured four wins already in 2020 and will be looking to make history next month by picking up a fifth win in a single calendar year against ‘The Joker’

Holland is something of a step down in the #3 ranked middleweight. Hermansson claims several ranked 185lb fighters turned down the chance to face him before the always-game Holland answered the call for December 5.

“Hey guys! You know what’s up. Darren Till pulled out of our fight,” Hermansson said on social media.“And that sucks because preparation has been going really, really well. I’m in the best shape ever. I was really looking forward to fight Darren. I wanted to show you guys that I am the best middleweight in Europe and that I am the next true title contender. But what can you do? Shit happens, so I can only wish Darren Till a good recovery.

“When we got the new we asked the UFC for a replacement fight because the training camp has been going so good and I really want one more fight this year. So, they started to ask people above me in the rankings and below me in the rankings. At least five guys turned the fight down. But there was one guy that was willing to fight and that was Kevin Holland. If you follow the sport you know he is a good up and comer. He’s on a great win streak right now so I hope this makes for an exciting fight.

“I am the best I have ever been. I am really looking forward to making a statement on December 5 so make sure you guys tune in. Thank you so much for your love and support – peace out.”

Who do you think turned down a main event fight with Jack Hermansson?