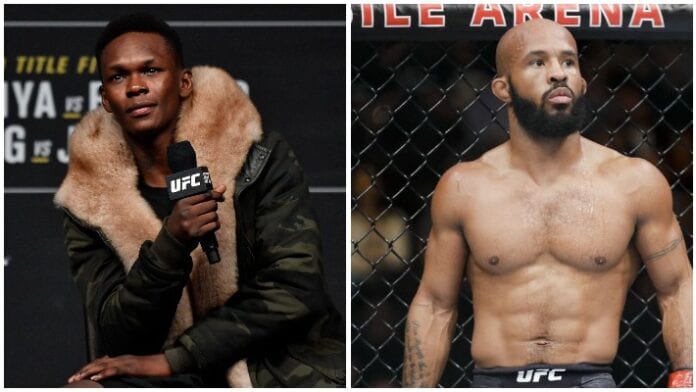 UFC middleweight champion Israel Adesanya has offered his thoughts on the ongoing greatest of all-time debate. Jon Jones has declared himself the MMA G.O.A.T in the last couple of weeks but some fans believe he has been displaced by the recently retired lightweight champion Khabib Nurmagomedov.

Other notable fighters who are often brought up in the debates are Georges St-Pierre, Daniel Cormier and Anderson Silva. ‘Stylebender’ believes the ultimate G.O.A.T is being ignored by the majority of people. Adesanya chimed in on the raging debate during a recent interview with Submission Radio, he said.

“F**k weight classes, just the perfect fighter, near perfect, never had one blemish outside the Octagon with steroids or anything like that. Never had any real problems outside the Octagon. Few losses here and there from Cruz and Cejudo. But a phenomenal fighter.”

“Someone who I would watch, and just be like, how’s his brain processing all this at the same time. The suplex to arm-bar. Stop all that GOAT talk, and jibber-jabber. (Transcribed by Essentially Sports)

Johnson joined ONE Championship in 2019 as part of a historic trade deal that saw Ben Askren join the UFC. ‘Mighty Mouse’ has since picked up three victories, winning the flyweight gran prix in the process.

Do you agree with Israel Adesanya? Is Demetrious Johnson the greatest MMA fighter of all time?