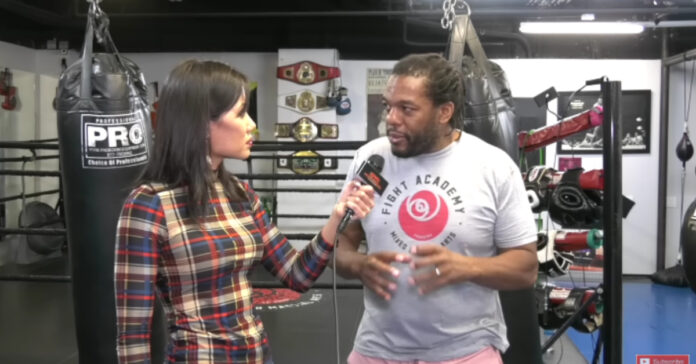 In the main event of the evening, Leon Edwards scored a spectacular head-kick knockout of former welterweight champion Kamaru Usman to capture UFC gold with less than a minute remaining in the fight. While most of the world has been celebrating Edwards’ historic victory, some are bringing attention to an overlooked detail. Specifically, multiple fence grabs by ‘Rocky’ during the world title clash. Calling out the new world champion for his illegal tactics was former UFC title challenger Chael Sonnen. Herb Dean was serving as the referee for the headlining bout.

“Leon was frustrated in positions and had no way out of positions to the extent that he cheated repeatedly, not once, not an accident, not the ref didn’t see it… the ref broke the act five or six times…”

Herb Dean, who made his UFC refereeing debut at UFC 47 in 2004, spoke with Helen Yee about fence grabs and why fighters are rarely penalized for them, even after multiple warnings.

“Fence grabs are a very difficult thing to deal with in the sport because it’s a natural reaction. It’s going to happen, but to deduct a point… So let’s take a look at what a point deduction means in the sport. What does a point deduction mean? What’s the most common score that goes to the card? 29-28. So that means we have a one-point sport. For a majority of fights that happen, that go to the cards, 29-28 is the most common score.

“So when you take a point, that means you’ve taken a win. It’s not like in other sports where you have 12 rounds and you take a point. It’s a much stiffer punishment and the majority of fights that happen, when you’ve taken a point, you’ve taken a win. To have that balance there, that point, that grab needs to significantly affect the fight and it doesn’t always have to happen right away. Those things are judgment calls of the referee. You’re gonna say, ‘Ok, how many times has this happened? Is there other fouls?’ Or hey, even this one time this guy has spent a lot of energy and I can’t rebuild the position in any other way and so I’m gonna choose not to give a warning at this time or take a point.“

Herb Dean Stresses That Not All Fouls Are Equal

Continuing his conversation with Helen Yee, Herb Dean spoke about the importance of rebuilding positions in the event of an especially egregious fence grab that has resulted in someone gaining a superior position. Herb Dean also said that not all fouls are equal with some considered to be harmful (low blow, eye poke) while others, such as fence grabs, are considered non-harmful.

“Those are really difficult situations. What’s best is to try to rebuild the position if you can. We want to take a point if there’s… We want to try to rebuild positions as much as we can and some situations are easier. If it’s a takedown, you can’t predict where that person would have landed, but if someone gets a superior position, at least you can take away the superior position.

Herb Dean’s explanation of the refereeing process certainly makes sense. However, what seems to frustrate MMA fans is the lack of consistency in refereeing. One referee may let a foul go with little warning whereas another will quickly offer a stern warning, even taking a point straight away.