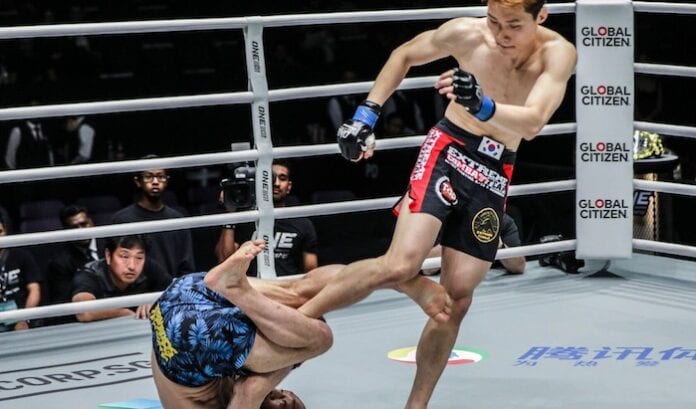 With grapplers training leg locks more than ever in this era of Jiu Jitsu more entries are being innovated. Everyone that likes attacking the legs is looking for the easiest path to attack them.

There is one especially flashy, yet effective entry that leg lockers are finding success. The Imanari roll.

When someone is able to pull it off, the Imanari roll is one of the coolest techniques to witness. A crowd absolutely loses their minds when they see a fighter or grappler hit an Imanari roll.

Let’s take a deep dive into the highly technical Imanari roll. We’re going to give you a bio on the creator, how it works, and a few different Imanari roll techniques.

Who created the Imanari roll?

The technique was named after its creator Masakazu Imanari. If you don’t know who Imanari is, he is a MMA and grappling legend.

Imanari has been one of the most dynamic competitors in MMA and grappling for the last 20 years. He is a master of leg locks and has numerous highlight videos showing his expertise. Not only in leg locks, but his Jiu Jitsu game as a whole.

Before Masakazu started competing professionally in fighting, he was also a professional wrestler. Which is how he got his flair for the dramatic doing flashy moves to get the crowd into his fights.

Flying across the ring at the opponent locking in numerous jaw dropping submissions. His style has given him incredible respect from the grappling community and inspired many young grapplers.

Although by far what Imanari is most known for is the technique he created and named after. The Imanari roll.

He created this technique over 20 years ago as a way to surprise his opponent and attack their legs. This unorthodox technique has been incredibly successful for not only Imanari, but many other elite grapplers.

Including most recently by Ryan Hall against former champion BJ Penn. The first ever successful Imanari roll in the UFC.

Without a doubt Imanari has influenced the grappling world with the Imanari roll. Grapplers today are continuing to revolutionize the move Imanari created, which is the highest respect you can give him.

How does the Imanari roll work?

The Imanari roll works as a bypass to traditional leg lock entries. With traditional entries, you have to either set them up from takedowns or a position on the ground.

You fake like you’re going for a takedown and do a back roll mixed with a berimbolo roll. Taking the opponent by surprise, taking them down and ending up in a leg entanglement. Once you hit the ground, you can work to take the leg lock of your choice.

You start the roll with a penetration step. This step is everything as it gets you in range for your roll. Without it, you’ve won’t even get close to getting the move.

When you get your grip, you start your roll and hook your inside leg between the opponent’s legs. Immediately after, your other leg goes behind and underneath their outside leg.

You hook the opponent’s far leg with both of your feet as you use your momentum to take them down. Landing you right into a leg entanglement ready to lock in a submission.

How can beginners learn the Imanari roll

For beginners, the Imanari roll might seem too complex for them. Although in reality, they just need to break the technique down in segents before practicing it.

The core movement of an Imanari roll is a sideways roll, so beginners can drill the solo drill. Start by sitting on a line, keep your hands in and roll back and forth on your shoulders. Keep doing it until you’re able to continually in a straight line.

After you get the hang of the sideways rolls, you can go into the partner drill variation. Start from sitting with your leg between your partner’s legs similar to a berimbolo partner drill.

As you go for your shoulder roll, your inside leg catches on your partner’s leg. At the same time, you put your hand in between their legs and grab behind their know.

Doing this movement will naturally wrap you around the opponent just like in a normal roll.

Like we said detailing the basic Imanari roll, you have to set it up. One way you can set it up is from a tie up and snap down.

You can go right to an Imanari roll from a tie up/snap down when you start a roll. Normally snap downs are used to set up takedowns, but here we’re going to Imanari roll.

Take a tie up and snap your opponent down. Instinctively, they will immediately pop up when they get their posture broken.

As they go to raise their head go right for your Imanari roll to get in position for your leg lock.

Another set up to an Imanari roll can come off a failed low single leg attempt. Sometimes when you drop low for an ankle pick a defense is to take their leg away.

Finishes for the Imanari roll

Traditionally, the finishing leglock for the Imanari roll is an inside heel hook, but there are other options. Two specifically we’ll detail is an ankle lock and a knee bar.

Let’s say you get the Imanari roll and they immediately start defending the inside heel hook. Pull their far leg over putting them in 411 position and take an ankle lock.

The knee bar option off an Imanari roll is also a good option you can go to. Especially if you’re doing a tournament, where heel hooks aren’t allowed.

When you get into position turn your body a little further, grab their heel with two hand and pull inward.

Tips for doing the Imanari roll

If you love doing the leg locks, the Imanari roll is a great entry that you really need to learn. Here are some tips for how to do the roll properly.