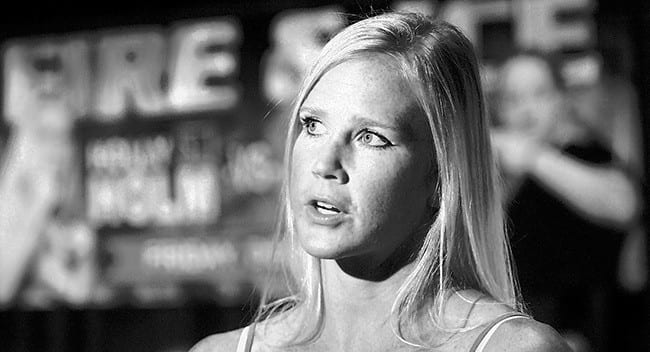 UFC 193 goes down in Melbourne, Australia this coming November 15th in the Etihad Stadium, and the promotion will be looking to break all-time attendance records with the landmark show. In the absence of Robbie Lawler vs. Carlos Condit, a rather fitting slot was made available to the most marketable star under the Zuffa banner; Ronda Rousey. Her showdown with Holly Holm will be the main event of the blockbuster PPV (pay-per-view) card down under, and as usual ‘Rowdy’s’ opponent has come in a heavy underdog.

The former boxing champion and kickboxer ‘The Preacher’s Daughter’ is 9-0 in her MMA career, and will face the biggest challenge available in all women’s MMA at UFC 193. She doesn’t deny that it will be very tough to fight Rousey, but also tells Inside MMA, as quoted by BloodyElbow, that the champ is beatable:

“She’s got a well-rounded game. I’m not going in there thinking, ‘oh I only have to worry about, you know, grappling.’ I do know she has knockout power so I don’t feel like you guys are going to see what you’ve seen before with her. I fear everything about her. Standup, ground, clinch, all that. And I feel like that’s the way you need to be with any fighter.”

“There’s things that transfer over [from boxing] and things that don’t. There’s things from my boxing career that I had to let go of that would not work, especially in this fight. I mean, you can’t just stand there and do inside boxing with someone who’s very good at judo.”

“Everybody’s beatable. Is it going to be hard as heck? Absolutely. It’s going to be the hardest fight of my career. I have to absolutely do everything right from the beginning to the end of the fight. Is it going to be easy? No, that is not what I’m saying. But I’m going in there to win and it’s very possible.”

Holm’s chances have been greatly debated since the sensational announcement of the bout, with many arguing that she hasn’t developed enough to get the shot at the dominant 135-pound queen. Truthfully, there probably aren’t any contenders in the division that are advanced enough to topple Rousey, but many have more than the two UFC fights that ‘The Preacher’s Daughter’ rides in to her UFC 193 title fight.

Of course Ronda Rousey is beatable, but how many have faith that the former boxing boss is the one to do it? Holly Holm’s power in the striking is obvious, but let’s remember it’s Rousey that has knocked out three from her last four opponents, and Holm that’s only scored one T/KO from her last four.