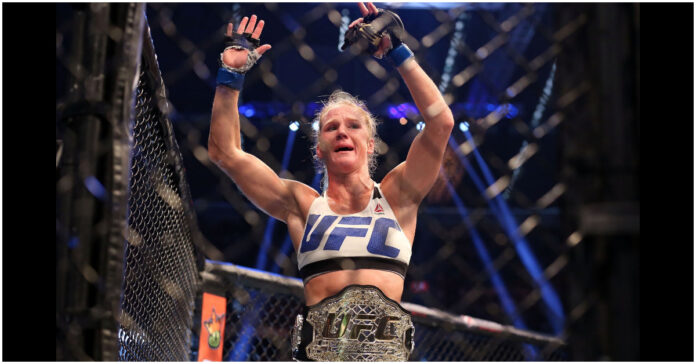 Holly Holm is eyeing a shot at the title if she’s able to dispatch Ketlen Vieira at UFC Vegas 55.

Former UFC women’s bantamweight champion Holly Holm has not given up her pursuit to get the promotional gold for the second time in her professional career. Having already been at the top once, ‘The Preacher’s Daughter’ believes a win in her next outing can put her in the mix of title contention.

This weekend, Holm will headline UFC Fight Night 206 when she takes on Ketlen Vieira at UFC Apex, Las Vegas. Vieira has been the more active fighter of the two having fought twice last year and going into the bout off a win over Miesha Tate in November 2021.

The main event will mark Holm’s return to action after a two-year hiatus. She last competed in the cage in October 2020 when she secured a win over Irene Aldana.

In an interview with TMZ Sports, Holly Holm talked about the danger she sees in her opponent. The 40-year-old believes she will significantly up her chances of getting a title shot if she manages to get a win over Vieira.

“She’s tough, she throws punches with intent. She wants to make me hurt. She is trying to clinch, she’s got her trips, she’s got her takedowns. She’s got a lot of heavy pressure when she’s on top. So, she has a lot of things that make her a very difficult fighter, a very difficult opponent. I’m just ready for all of it and I’m going to be better at any of those situations.”

Currently ranked second contender at UFC women’s bantamweight, Holly Holm is only under the former ‘champ-champ’ Amanda Nunes in the divisional rankings. Given the outcome of Nunes’s last fight where she lost her title to Julianna Pena, a rematch would likely be on the cards as far as title matches go.

A win over the fifth-ranked Vieira may not do much for her in terms of getting a chance against Pena in her next contest. However, she will be able to put herself in a better position to probably take on the winner of the rematch between Pena and Nunes.

Holm spoke about how her life’s purpose is to be a champion and that she’s fully committed to it.

“I definitely think that could be the very next step. If I win this, I feel like the very next fight could be for a title. And that’s why I need to make the most of this fight. Any fight I have, I treat as my last fight only because it is that important. It could be your last opportunity, you never know.”

“I still want to be a champion, and I’m committed 100 percent. Otherwise, what would my purpose even be right now?”

Do you want to see Holly Holm fight for the title?