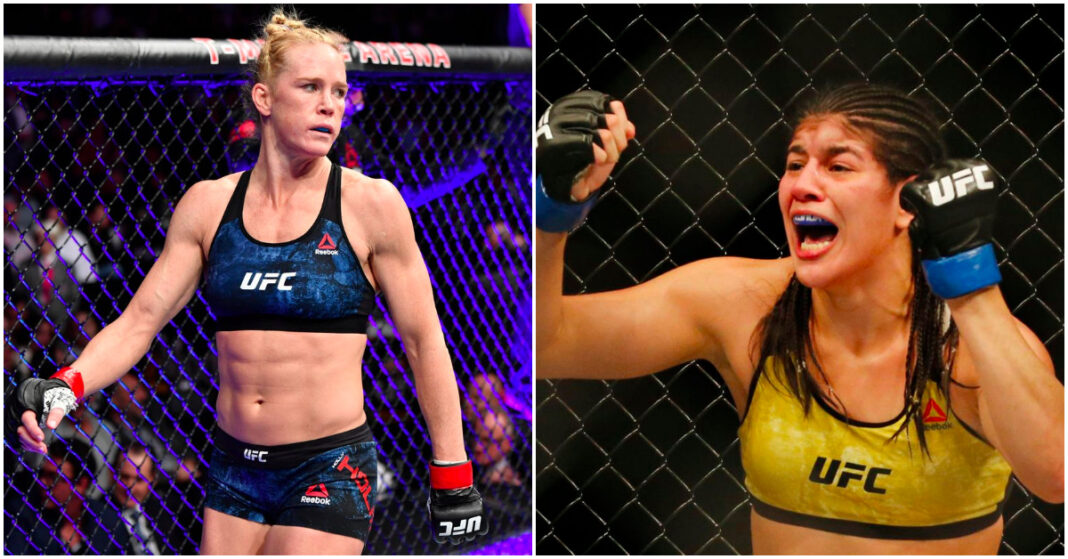 A showdown between two women’s bantamweight contenders is in the works to headline the May 21 Fight Night card in Las Vegas according to Ariel Helwani of The MMA Hour.

Holm hasn’t stepped inside the octagon since October of 2020 when she dominated Irene Aldana over the course of five rounds en route to a unanimous decision victory. ‘The Preacher’s Daughter’ was scheduled to take on Norma Dumont at a UFC Vegas event this past October but was forced to pull out with a knee injury just 10 days before the fight.

Holm has not lost since she was stopped by Amanda Nunes in July of 2019, defeating Irene Aldana and Racquel Pennington during this time.

Known for her high-level kickboxing abilities, Holm currently sits at number two in the women’s 135-pound rankings while Vieira holds down the number six spot. However, the fight is much closer than the rankings would suggest as Holm will be faced with the task of taking on a rising competitor unlike many she has dealt with in the past.

Vieira holds a black belt in Brazilian jiu-jitsu along with a black belt in Judo and a Brazilian national wrestling title. She has taken on a who’s who of the bantamweight division since arriving in the UFC, holding wins over the likes of Cat Zingano, Sara McMann and most recently, Miesha Tate. Her lone submission win came against Mcmann at UFC 215 in Edmonton.

Vieira, who sits at 12-2 as a pro, began her UFC career by going 4-0 before being knocked out by Aldana, whom Holm defeated in her last outing. Holly Holm currently holds a professional record of 14-5.

Who do you think takes this one on May 21st? Holly Holm or Ketlen Vieira?