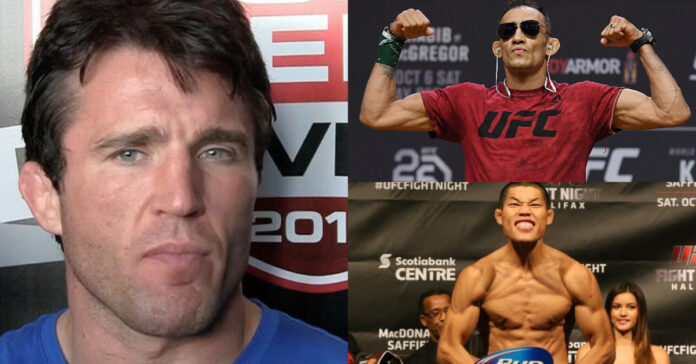 Chael Sonnen is not a fan of the upcoming fight between Tony Ferguson and Li Jingliang.

Former UFC middleweight Sonnen is one of the most notable athletes to have come out of the promotion and is often credited for understanding the entertainment part of things in the sport. While he usually seems to side with the UFC on many decisions, he does not seem too impressed with their recent matchmaking.

Chael Sonnen does not understand the point behind Tony Ferguson vs. Li Jingliang

Coming off the first-ever knockout loss of his career in May, Tony Ferguson got paired up for a move up to the welterweight division with Li Jingliang for the co-main event of UFC 279, scheduled for Sep. 10 in Las Vegas, Nevada.

In an appearance on The MMA Hour with Ariel Helwani, Chael Sonnen shared his thoughts on the nearing showdown.

“I don’t like it,” Sonnen said (ht MMA Fighting). “Now we’re going to bring Ferguson back, great story, he’s hanging in there, he’s traded camps, he’s doing things different, and you’re giving him — I don’t know of ‘Leech’ [Jingliang]. I don’t know if that’s his nickname or that’s his name, and I’m not trying to be a dick. I assume you call a guy a leech, like he claims to be — I haven’t the foggiest idea who we’ve got opposite Tony Ferguson or how we’re supposed to pretend that that matters.”

“The American Gangster” is of the opinion that there are no clear stakes for the matchup that could draw people’s interest. Sonnen argued the promotion may not have thought it through, questioning what would happen next after the result.

Do you agree with Chael Sonnen on the UFC 279 co-main event?