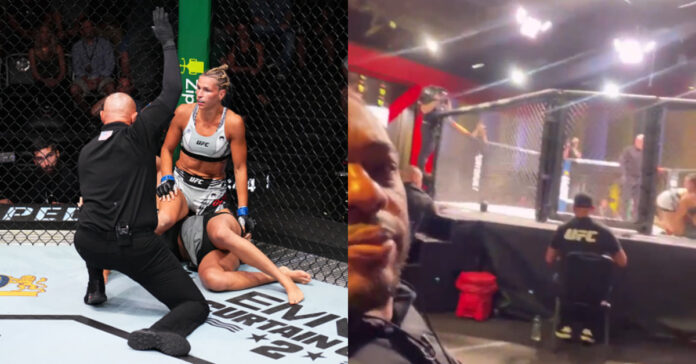 UFC referee Herb Dean appears to have been filming a video for Cameo during the controversial finish of Mayra Bueno Silva vs. Stephanie Egger on Saturday night.

UFC Vegas 59 opened in a rather bizarre fashion with the women’s bantamweight bout. At the 1:17 mark, Silva appeared to have an arm bar locked in on Egger and then suddenly let the hold go. Silva argued that Egger had tapped out, but there was no indication of a tap and referee Chris Tognoni clearly did not see it. Despite this, Tognoni called a stop to the action, took Silva’s word for it, and immediately called for a review via instant replay. With the two fighters pressed up against the fence, there was no angle that clearly showed a tap by Egger leaving it to the cage side judges to decide.

Sitting cage side for the contest was tenured referee Herb Dean, but instead of watching the contest, Dean was busy filming a video for Cameo, a popular video-sharing site that allows celebrities to charge money for personalized messages to fans. As Dean speaks on camera, he pans to the Octagon where we can clearly see Silva and Egger in the middle of the evening’s opening contest.

Tenured UFC referee Herb Dean is regularly a topic of discussion amongst MMA fans. Over recent years, the UFC referee who made his promotional debut at UFC 47 almost 20 years ago, has been accused of being indecisive. Even UFC President Dana White commented on Dean’s indecisiveness following UFC Vegas 42’s co-main event between Ben Rothwell and Marcos Rogerio de Lima. As Rothwell was dropped in the opening minute of the fight, Dean instinctively grabbed de Lima by the waist, signifying that he was stopping the fight, but then appeared to let Rothwell go for a takedown. Dean officially called for the stoppage only when de Lima threw his hands up in utter confusion as to what Dean was doing.

As for the debacle between Silva and Egger, it’s unclear if Dean has any influence on the decision. Michael Bisping can be heard saying Dean’s name, indicating the referee was involved in the conversation, but it was UFC referee Mark Smith who was working instant replay for the contest.