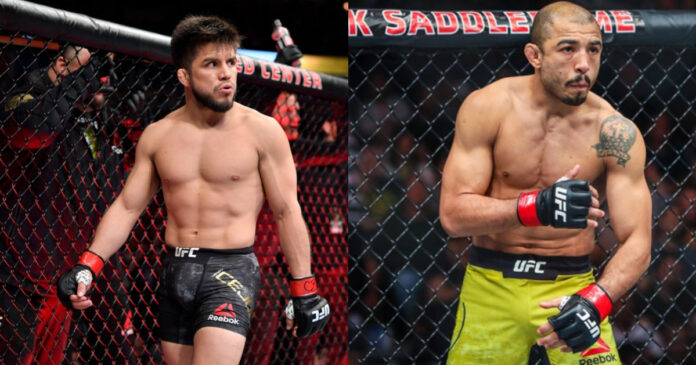 Former two-division UFC champion Henry Cejudo has reacted to the announcement that Jose Aldo has retired from MMA.

Yesterday it was announced that former WEC and UFC featherweight champion, Jose Aldo, had retired from MMA and was released from his UFC contact.

Fighters, media, and fans alike have all taken to their respective outlets to share their respect for Aldo, one of which was former bantamweight ruler, Henry Cejudo.

Cejudo would share his admiration of the Brazilian, referring to him as a ‘real hall of famer’.

“I was supposed to fight him right before the pandemic happened, and that event ended up being canceled,” Cejudo said to Helen Yee. “Brazilians couldn’t come over to the U.S., so I was gonna fight him in Sao Paulo, so I wanted to give Jose Aldo the introduction, especially in his hometown. He’s a legend. He’s the greatest featherweight of all time, and he’s a real Hall of Famer. Sometimes you can be given Hall of Fames in the UFC, but this one is truly, truly earned, and he’s one of the greatest of all time.”

Cejudo would also add that it doesn’t necessarily mean that Aldo’s career is over, he has the option to pursue pay cheques fighting in exhibitions or even professional wrestling.

“I think this is the time for him to make money,” Cejudo said. “I think this is time for him to do, whether exhibitions – we just saw Nate Diaz, too, over at the WWE (event), he’s looking to dabble into WWE, so make money. We got to use the brand that the UFC has given you, all these other platforms and continue to keep making money and be an entrepreneur, so I’m happy for him.”

It is a realistic assumption that we could see Aldo potentially compete in an exhibition fight or even a professional boxing match, especially in the current climate that combat sports finds itself in.

Do you agree Henry Cejudo, should Aldo try professional wrestling?