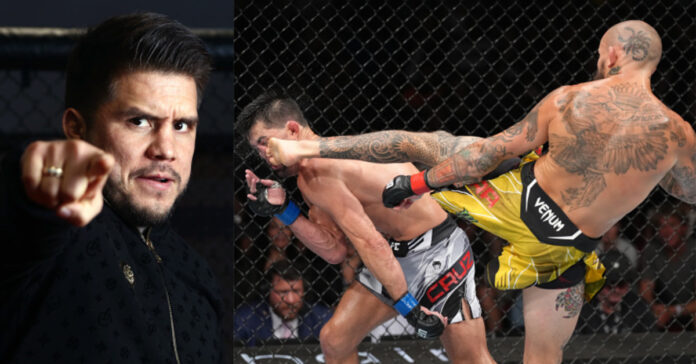 On Saturday night, Marlon Vera, better known by MMA fans as ‘Chito,’ scored a spectacular fourth-round knockout over two-time world champion Dominick Cruz, delivering a picture-perfect head kick that immediately flatlined the bantamweight icon. It was a statement victory for Vera who is quickly working his way towards the top of a stacked division.

While fans were mesmerized by the highlight reel knockout, not everyone watching was impressed. Taking to Twitter, Henry Cejudo shared his displeasure with Vera’s performance saying the Ecuadorian fighter could have finished Cruz multiple times and opted not to.

“[Dominick] was easily winning that fight(4-0) he leans the head too heavy and it’s the same way I knocked him out too. Chito won but I’m not impressed by his performance. Going back too much and getting point fought the whole fight. Chito could have finished him a couple times and didn’t.”

‘Triple C’ officially retired from mixed martial arts following his own second-round knockout victory over Dominick Cruz at UFC 249. Cejudo has since announced his intentions to return to the Octagon and reportedly re-entered the USADA (United States Anti-Doping Agency) testing pool in anticipation of a highly anticipated comeback.

For ‘Chito’ Vera, the win over Cruz was his fourth straight and likely his highest profile victory. Previously, Vera earned victories over Davey Grant, Frankie Edgar, and Rob Font. Going into the bout, Vera was the No. 5 ranked bantamweight contender while Cruz sat in the No. 8 position. It remains to be seen if Vera’s win on Saturday night moves him up the list, but with four-straight victories, Vera could very well be in line for a title opportunity in the near future.

One of Marlon Vera’s biggest wins came against fan favorite Sean O’Malley at UFC 252. While O’Malley refuses to acknowledge the loss, the rest of the world saw Vera change the channel on ‘The Sugar Show.’ Henry Cejudo revealed back in 2020 that he connected with Vera and gave advice ahead of the bantamweight showdown.

“Right before he fought Sean O’Malley, I sent him a message, we aren’t even friends, but we have a lot of friends in common. I’m like listen man, the way to beat this dude is to make him fight his b-side,” Henry Cejudo said while speaking to Mike Swick. “Put him in the clinch, put him against the cage. And because of his stance because he is heavy with his left leg forward.

“I said smoke the hands and take out the f*****g kicks. Smoke the hands and just fasten that calf kick, because it’s been taking everybody out. It happened to me with Demetrious which is why I went from the karate stance to a little more neutral because people were catching on to it a little too much. We chatted.”