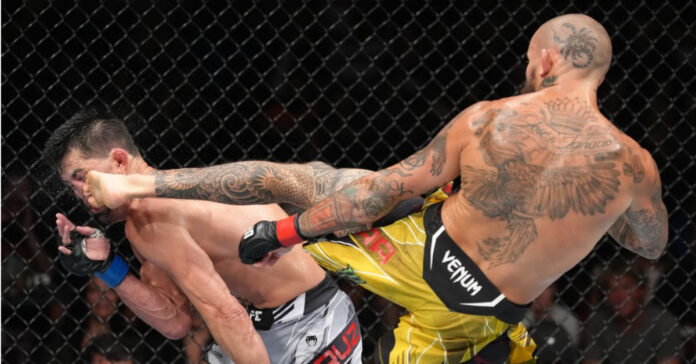 Watch the moment Marlon ‘Chito’ Vera land a devastating head kick on Dominick Cruz, knocking him out and breaking his nose.

Last night at UFC San Diego, we were witness to a changing of the guard as surging contender, Marlon Vera, knocked out former two-time bantamweight champion, Dominick Cruz.

The 37-yeard-old Cruz would enjoy early success, out landing and blitzing the Ecuadorian, however, Vera would drop Cruz momentarily with a left hand.

Just like in his last performance against Rob Font, Vera proved he was more than happy to take one to give one, and in the fourth round he produced the fight-ending shot.

The sequence begins as Cruz starts backing up towards the fence, throwing a jab out as he moved. This small window was enough for Vera to throw a lightning-fast southpaw left kick, which Cruz met halfway as he ducked into the direction of the kick.

The shot would freeze Cruz mid-air, collapsing ‘The Dominator’ headfirst into the canvas. Vera would then rush in, landing a couple of shots before Herb Dean decided he had done enough. Watch the slow-motion replay below:

READ MORE:  Darren Till targeting fight with Israel Adesanya: Title or not, that's a striking match I want

What’s next for Marlon Vera?

The bantamweight division has no shortage of high level-contenders, but with a win over one of the greatest 135lbers of all time, Marlon Vera has seriously bolstered his claim for a title shot.

Already in the top five, Vera’s next fight will likely be a number one contender bout to decide who gets the next title shot.

As for Vera’s likely opponent, there are a few options. The winner of No.6 ranked Merab Dvalishvili and No.3 ranked Joe Aldo, which takes place next weekend is probably the most viable, especially since Aldo and Vera have already fought, a bout which Aldo won back in 2020.

The winner of Petr Yan and Sean O’Malley could also be an option, but with Yan being ranked No.1 and O’Malley being pushed so hard by the UFC, a win for either could mean an immediate title shot.

Who do you want to see Marlon Vera face next?