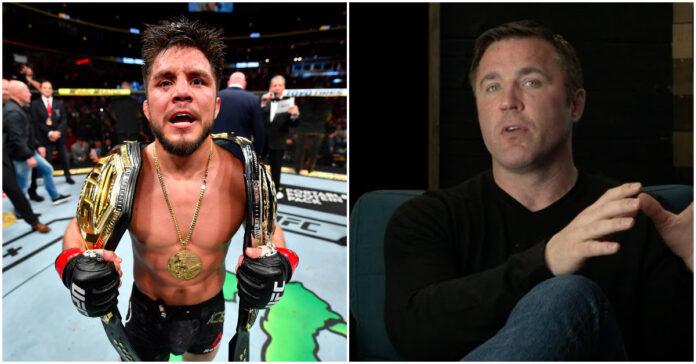 In a recent video on his ‘Bad Guy Inc.’ YouTube channel, Chael Sonnen said that Henry Cejudo is back in the USADA testing pool and training twice a day as he prepares for a comeback to MMA.

Although Cejudo has not stepped in the octagon since he retired after defeating Dominick Cruz at UFC 249, ‘Triple C’ has been in the media of late teasing a return to fighting.

Cejudo, who has a professional record of 16-2 was a two-division champion in the UFC, earning gold at both flyweight and bantamweight. He’s stated that in a return he wants to take on 145-pound king Alexander Volkanovski, a fight he has been pursuing for some time now.

“Henry for sure, are you coming back?” He said: “Yes… I’m in the USADA pool, I’m training twice a day, I’m ready to go. I want Volkanovski.”

To which Sonnen replied,

Sonnen finished by saying; “So for you Cejudo fans out there, be happy, you’re getting your guy back. Henry will be back.”

Check out the full rant below:

However, Cejudo’s online war of words has really been more with UFC President Dana White than it has been with Volkanovski, himself.

Likely due to the way Cejudo unceremoniously left after his last fight, the boss has made it very clear that Cejudo doesn’t just get to jump back in and cut the line in front of worthy contenders.

This means that Cejudo will probably have to take on at least one other competitor at featherweight before getting his hands on ‘Alexander The Great’. Dana White has engaged in some back and forth with Cejudo on Twitter and even urged him to ‘pick up his phone’ if he was serious during a recent Q&A.

Do you think Cejudo deserves an instant shot at the 145-pound crown or should he take on a top contender first?