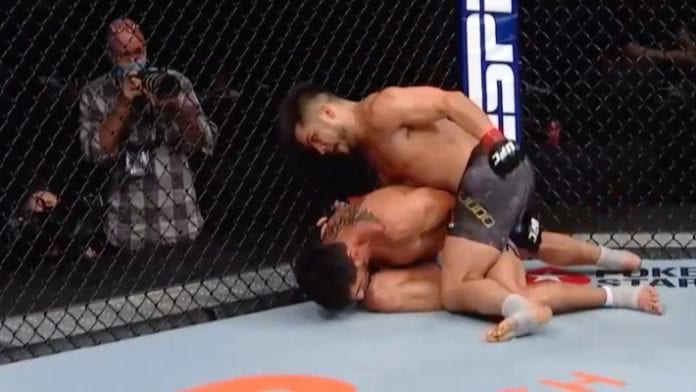 Henry Cejudo continues to build up his resume.

Cejudo successfully defended his bantamweight title against Dominick Cruz in the co-main event of UFC 249.

“Triple C” had the upper hand for majority of the fight before a knee connected flush with Cruz’s face that dropped the former champion towards the end of the second round.

Cejudo pounced on Cruz and landed a number of strikes. Cruz was trying his best to get up and looked like he was about to only for the referee to call the fight off in somewhat controversial fashion with just seconds to go in the round.

Cejudo proceeded to shock the world further by announcing his retirement in his post-fight interview.

“I’m happy with my career. I’ve done enough in the sport. I want to walk away,” Cejudo said (via MMA Junkie). “I want to enjoy myself. I’m 33 years old – I have a girl now who’s watching back home. I eventually want to start a family.

“Since I was 11 years old, I sacrificed my whole life to get where I’m at today. I’m not going to let nobody take that from me. So I’m retiring tonight. I’m 33 years old. I’m happy with my career. Uncle Dana (White), I want to say thank you for everything. You’re the man. … Thank you so much, but ‘Triple C’s’ out. You guys don’t have to hear my ass no more.”

What did you make of the finish and Cejudo’s retirement?