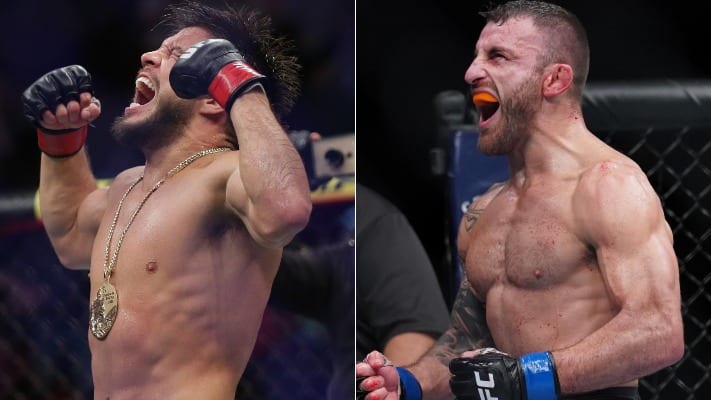 It’s become somewhat of a meme now that UFC bantamweight champion Henry Cejudo only calls out fighters coming off losses.

“”Triple C” was originally scheduled to defend his bantamweight title against Jose Aldo at UFC 250 next month. With Aldo — currently on a two-fight losing streak — now unable to travel to the United States, the plan is for Dominick Cruz to face Cejudo instead.

Cruz notably hasn’t competed since December 2016 when he lost his bantamweight title to Cody Garbrandt. Speaking of Garbrandt, “No Love” is on a three-fight losing streak and has also been a target of Cejudo’s with the pair recently trash talking each other.

One fighter not impressed with Cejudo’s callouts is featherweight champion Alexander Volkanovski. “”The Great” has also been called out by Cejudo in the past and feels it’s embarrassing for him to call out just about everyone except the top contenders in his division such as Petr Yan and Aljamain Sterling.

Unsurprisingly, Cejudo had a response for the Aussie.

“What’s going to be more embarrassing is when you lose to a flyweight you overgrown midget! This ain’t Hugby! #younext ???+?”

Cejudo is already a former two-division champion and it would be some feat if he was able to move up to featherweight and potentially become a three-weight champion as well.

Given Volkanovski’s smaller stature for a featherweight, it’s a fight that makes sense too. Whether Cejudo gets that opportunity is another question, however.

What do you make of Cejudo and Volkanovski beefing with each other? Do you want to see them fight in the future?