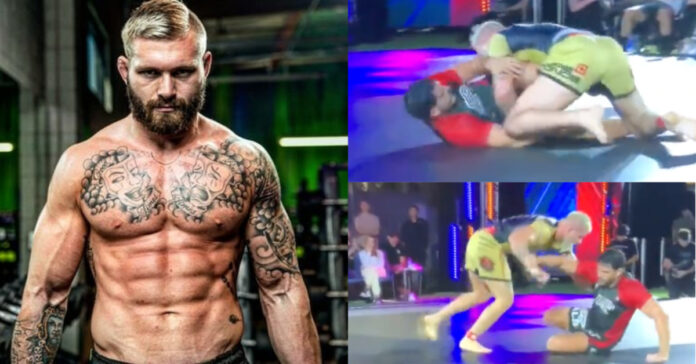 One of the greatest Jiu Jitsu practitioners on the planet, Gordan Ryan defended his throne at the 2022 Tezos WNO against Felipe Pena. A man who also carries a well-respected arsenal of world-class Jiu Jitsu.

In fact, Pena had actually defeated Ryan twice before their match at the 2022 Tezos WNO. Trash talk had escalated, and it all built up to a grappling match that was six years in the making.

The match was hyped, as fans knew they were going to see both athletes forced to pull out all the stops, and they would not be disappointed. With a limitless amount of time, the two men were able to grapple without needing to worry about time restrictions and fully delved into their bag of tricks.

The bout started with some hand fighting, and neither man looked to gain the advantage. It was obvious they had all the time in the world, so both warmed up in a slow but steady manner.

Things escalated when Gordon Ryan dropped to a guard. Pena would follow, but in a moment of Jiu Jitsu trickery, Ryan would escape out the backdoor and pursue the back of his adversary. Eventually, they would land in a body lock pass, but Pena would recover to open guard.

As the minutes flew by, the match turned into a relative stalemate with good moments for each athlete at varying instances. The longer the match drew on, the more Gordon Ryan would shine.

A finish to a hard-fought war

With vicious slams and mat returns, Ryan began to wear down on Pena, who had exhausted seemingly everything in his arsenal. Around the forty-minute mark, things got especially rough.

With a final high-impact takedown, Gordon Ryan would slam Pena down and apply top pressure. In the exhaustion, it must have been enough for Pena to succeed, as he finally signaled to the referee that he was done after a hellacious 44 minutes and 41 seconds.

Is Gordon Ryan the greatest BJJ practitioner on the planet right now?