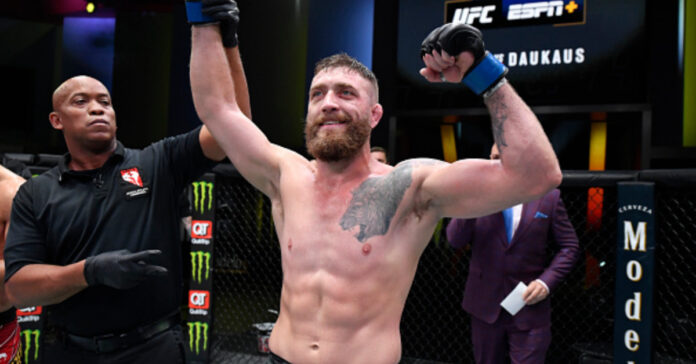 Opening the evening’s main card will be ‘GM3’ as he meets Bruno Silva. With both fighters having their winning streaks halted in their last outings, Meerschaert and Silva will look to get back into the win column and potentially break into the division’s top 15 rankings.

In an exclusive interview with LowKick MMA, Gerald Meerschaert discussed his brilliant run in 2021 where he rattled off three straight victories. During the conversation, talk turned to American fans and the belief that those fans don’t typically support American-born fighters the same way they appear to support those hailing from a foreign country.

READ MORE:  Gregory Rodrigues speaks out after insane UFC comeback: ‘My wife is mad but the doctor did a great job'

“I think there’s probably a lot of things. I think one thing would be definitely oversaturation of the market so to speak. Even in the UFC, it’s an American-based company so most are from here, and you know, America is still a pretty big center worldwide for culture and exporting culture and stuff like that. Nobody wants to root [for] the big kid on the block. So it’s like if you come from the U.S. we have a lot of opportunities and things that maybe other people don’t have.

“Basically, why are you gonna root for the spoiled rich kid, you know what I mean? But then you come from somewhere else, I think there’s another side of that too where if there’s not as many fighters from where you’re from, or they’re just much more feverishly into sports like that, they’re gonna get behind their own. The only things in America that people really get into like that right now are football and baseball. And even then, you kinda gotta be a big deal, but we just don’t have that same fan base for other sports, especially combat sports.”

Following a tumultuous 2020 where he lost two out of three bouts, including a 17-second knockout against welterweight star Khamzat Chimaev, Gerald Meerschaert is intent on regaining some of the moment that he got from his spectacular 2021 run. Bouncing back from a rough patch in the wake of COVID-19, ‘GM3’ would go on to score three straight wins against Bartosz Fabiński, Makhmud Muradov and Dustin Stoltzfus. All three victories came by way of submission.

Hoping to carry that momentum into 2022, Gerald Meerschaert’s streak was halted by Krzysztof Jotko who defeated ‘GM3’ in April. Meerschaert is ready to get back to his winning ways, but he’ll have a tough test against Brazilian opponent Bruno Silva.

Silva’s seven-fight win streak was snapped by the man to knock out Israel Adesanya in combat sports, Alex Pereira. While Silva lasted the full 15 minutes, he was unable to match the power and precision of Pereira. Now ‘Blindado’ is ready to get his hand raised on Saturday night at the expense of submission machine Gerald Meerschaert.