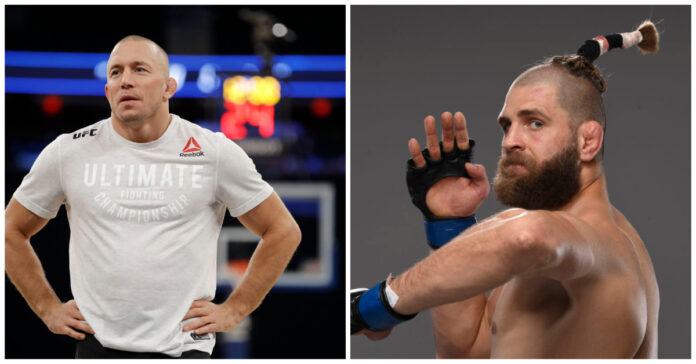 UFC Hall Of Famer, George St-Pierre shares his thoughts on half of this weekend’s main event, Jiri Prochazka, declaring him a ‘future world champion’.

UFC 275 will be host to a light-heavyweight clash between Glover Teixeria and Jiri Prochazka, where Teixeira will aim to make his first title defense.

Teixeira has competed in 21 UFC fights, and has been a presence in the light-heavyweight division since 2012, having fought the likes of Jon Jones, Rashad Evans, and Alexander Gustafsson, but will have his hands full with Prochazka.

The Czech Republic born Prochazka is like nothing the UFC has seen before, embodying the modern-day samurai code, the former Rizin light-heavyweight fights unlike anyone else, throwing an array of strikes from unusual angles.

Along with an unorthodox and unpredictable style, Prochazka packs some serious power, with 25 of his 28 wins coming by knockout. Although only two bouts into his UFC career, ‘Denisa’ has already done enough to warrant a shot at Teixeira- taking out two former title challengers in Dominick Reyes and Volkan Oezdemir in his first two UFC fights.

If there’s someone who knows what it takes to become champion it’s St-Pierre, the former UFC welterweight and middleweight champion is confident of Prochazka’s future.

Talking with James Lynch, ‘GSP’ was asked about Prochazka and seems impressed.  “He’s very dangerous, he’s a great striker but I think, his ground game we haven’t seen too much on the ground so its never been exposed that much.

“A lot of guys, they haven’t been exposed so I’m curious to see him compete more but he’s very impressive, I think he’s going to be the future world champion.”

Prochazka actually admitted in and interview, also with Lynch, that growing up, the Canadian was one of his idols and was ecstatic to hear his praise.

“That’s why I’m fighting! To show the people the beauty of the martial arts. And to hear that from Georges St-Pierre who’s my idol in my youngest years, it’s amazing and I’m very glad for that and I just have to say I will show my best in the next fight.”

Do you agree with George St-Pierre, is Prochazka a future world champion?