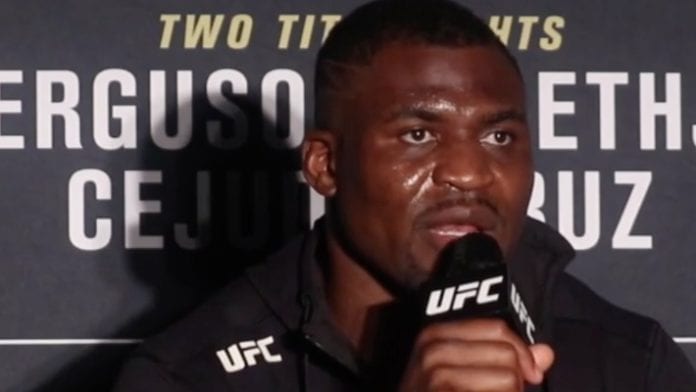 Francis Ngannou could be stuck waiting for a fight once again.

Ngannou knocked out Jairzinho Rozenstruik in emphatic fashion on the UFC 249 main card last night as he required just 20 seconds to earn the victory. It made it four straight first-round finishes for “The Predator” who is undoubtedly next in line for a heavyweight title shot.

The problem is when current champion Stipe Miocic will defend his title next. Miocic is expected to face Daniel Cormier in a trilogy fight later this year. However, he has also stated that he won’t fight unless he has a proper training camp amid the ongoing COVID-19 pandemic.

That makes things uncertain when it comes to Ngannou’s next fight.

“Honestly, I don’t know what is up next,” Ngannou said in the post-fight press conference (via MMA Junkie). “I think I’m going to let my manager talk with the UFC and see how it goes and see what they say. It’s very confusing, because right now, yes, we know Stipe is going to fight ‘DC.’”

Until last night, Ngannou struggled to land a fight with his last outing being his first-round knockout of Junior dos Santos back in July.

And even if Miocic ends up fighting Cormier later this year, Ngannou envisions it being another possible nine months up to a year without a fight which wouldn’t be ideal.

“The question is: When?” Ngannou added when asked of his return fight. “This is May – the beginning of May. We don’t know when. I have to wait for that fight and expect that the winner doesn’t get an injury or get hurt. Then, he’ll go take some rest, take vacation, and come back after two or three months. Then, he’ll go to training camp.

“I’ll end up with maybe nine months or one year again, this time. It’s something I didn’t like at all. I don’t want to be in that space again.”

Hopefully for everyone’s case, we get to see Miocic vs. Cormier III soon.

Do you think Ngannou will be stuck waiting again?