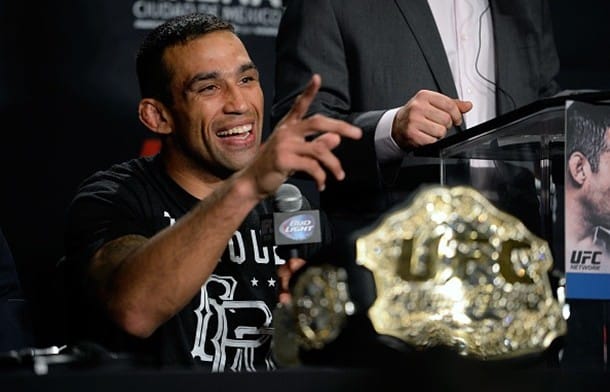 Although he may have initially stated that he would give former champion Cain Velasquez an immediate rematch after submitting him at June 13’s UFC 188 from Mexico City, current heavyweight boss Fabricio Werdum and his team quickly changed their tune to speak up for a title fight against surging popular former champ Andrei Arlovski.

Werdum also has a rematch with a third former champion in Junior dos Santos, who has somehow miraculously healed up from the serious injuries sustained in his UFC on FOX 13 win over Stipe Miocic, possibly pending. ‘Cigano’ also knocked him out at UFC 90 in 2008, forming the base of a rivalry that could be settled in the octagon sometime soon.

He’s fought all three of those fighters before, so those possibilities have Werdum planning for a sort of ‘rematch tour’ when he’s able to return to the cage sometime later this year. He opened up to MMA Fighting about his plans for the near future:

“It’s Arlovski now, ‘Cigano’ next, and then Velasquez again. That’s what I imagine,” Werdum said. “Cain will have to do one more fight, so I will fight Arlovski, Cain fights Miocic, and ‘Cigano’ is injured. That’s how I see it, but it’s up to them to earn it now.”

But the word on the street is that ‘Cigano’ is not injured, and although Arlovski may have the inside track to the next title shot, Werdum has big plans for his rematch with his familiar Brazilian foe. ‘Vai Cavalo’ cites dos Santos’ thunderous knockout over him as the point where he decided to become a true professional of MMA, and he wants to avenge it in a stadium in Porto Alegre, Brazil:

“I want to rematch ‘Cigano’ in Brazil, at the Arena do Gremio in Porto Alegre. It would be a dream come true,” he said. “Fighting in my hometown, where I was born and raised. The people from Porto Alegre love fights, especially now that they have one of them in the UFC. I’m sure that we would have 40, 50 thousand people at the Arena for this fight. We would break the UFC record.

“I want this rematch with ‘Cigano’ because I was not a professional the first time we fought. Not taking anything away from him. He went there and knocked me out, and then he won the UFC title. He deserved it. But I learned a lot with it. That loss changed my entire career. It was either become a professional or stop fighting. That was when I decided to become a professional fighter.”

Many have been fast to deem Werdum the greatest heavyweight of all-time after he submitted both the legendary Fedor Emelianenko and Velasquez, who was well on his way to usurping ‘The Last Emperor’ for MMA’s greatest throne. Werdum appreciates the comparisons, but also noted that he still has work to do in the form of these three rematches to truly cement himself as ‘The Baddest Man On The Planet’:

“Now, I want those rematches to have some kind of closure,” he continued. “I’ve done a lot for the sport. Those wins over Fedor, ‘Minotauro’ and Velasquez will forever be in the history of the sport. They say I’m the most feared man on the planet [laughs], but I don’t believe that.”

If Werdum can get through the rough-and-tumble gauntlet of his ‘rematch tour,’ then there’s not much doubt that he would certainly be the best heavyweight to ever lace up the gloves.

Will the stars align for him to even get all three of these fights as champion, and even if he does, will he somehow come out victorious in all three?