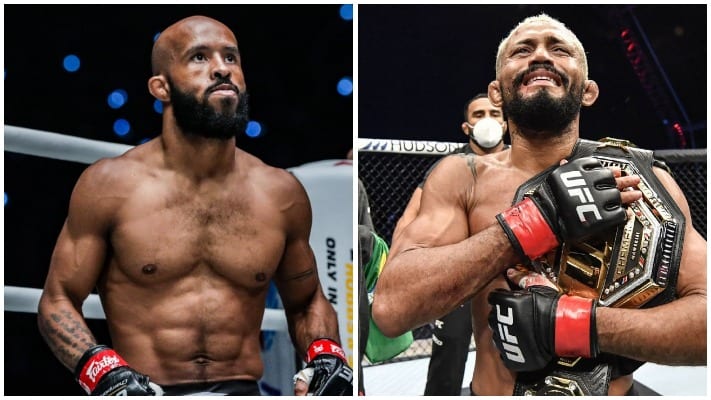 Figueiredo who picked up the vacant flyweight title by choking out Joseph Benavidez earlier this year looked sensational against Alex Perez at UFC 255 this past weekend. After a few early exchanges on the feet, the fight went to the floor. Figueiredo quickly locked up a guillotine choke and forced the tap from the Contender Series alum.

‘Mighty Mouse’ who’s is three fights into his ONE Championship career had nothing but praise for the man currently holding his old belt, during an exclusive interview with LowKickMMA, he said.

“I did see that,” Johnson said of UFC 255. “And it was a phenomenal performance by Figueiredo. I feel he was more skilful, and I think he’s big for that weight class. I think Alex (Perez) did a great job, but he just got caught. I mean, it was one of those things when it comes to Mixed Martial Arts you just get caught. I felt he just made a mistake, and he left his posture down. He left his head down like that and Figueiredo did a good job of capitalizing on it and sinking that guillotine in.”

Johnson is unsure if Figueiredo can have a long run as a champion like he did. Nonetheless the 34-year-old will be watching the UFC flyweight king with intrigue.

The ONE Grand Prix champion hasn’t really sized up Figueiredo as a potential opponent but knows it would be a tough fight.

“If I was to fight him (Figueiredo) I think the fight would be tough like any other fight would be,” Johnson said. “But it’s not something I’m jumping the bit to do. The only athlete that I’m concerned about fighting right now is Adriano Moraes because that is my next fight.”

“It’s always funny because I get way more excited for new games that are coming out than if I see an athlete,” Johnson added. “Like, ‘who do you think will win?’ It’s just the person I am. I’ve been doing it for so long where you’re going to see so many new athletes coming up. But, nothing to discredit him at all. He is a phenomenal athlete.”

Do you agree with Demetrious Johnson? Is Deiveson Figueiredo a phenomenal athlete?