LowKickMMA.com
Home UFC News EXCLUSIVE | Cris Cyborg On Why She Dislikes The UFC’s Treatment Of... 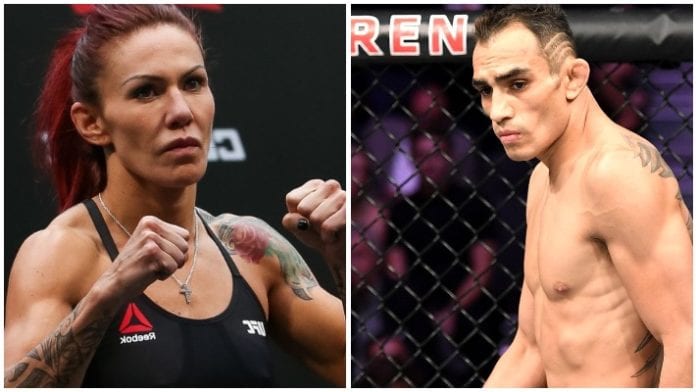 Cris Cyborg has explained why she called out the UFC for mistreating lightweight contender Tony Ferguson amid the postponement of UFC 249 last week.

The Bellator featherweight champion Cyborg hit out at the UFC on social media for failing to notify UFC 249 main event fighter Ferguson the event had been scrapped. ‘El Cucuy instead found out in the middle of the interview, which seemed unfair considering everything he had put into making the April 18 event.

MMA legend Cyborg took to social media and slammed the UFC. “I feel the biggest difference working with @BellatorMMA is the change in culture. @TonyFergusonXT deserved to find out before the media.”

Speaking exclusively to LowKickMMA Cyborg explained why she decided to speak out and how her own experiences with the UFC factored into the decision, she said.

“I dealt with a similar scenario finding out on Twitter that UFC 232 was being moved from Las Vegas to California and I was the Co Main event. I know the stress that goes into friends, families, sponsors, etc.  I also know the investment fighting takes financially to compete and as a partner feel the athlete should be given notice before Twitter.”

A week later Cyborg stands by her comments. The Brazilian power puncher also took time out to praise Bellator and it’s President Scott Coker who is in her opinion much better to work for, she said.

“”Scott Coker has proven himself in combat sports both as a promoter and as a martial artist.  He is a hard worker and has surrounded himself with other amazing employees.

“From the bottom to the top there is a different feeling of family within the organization.  It almost feels like having gone from being an employee at a franchise restaurant where you are just a number to becoming an employee at a family ran restaurant where everyone knows your name and everyone is looking out for each other.  My experience has been that the culture of Bellator MMA makes it much easier to bring forward my own ideas or concerns and that they are supported and valued when expressed.  For a female athlete, these types of things are priceless.

This culture of valuing the athlete has been most apparent to Cyborg during the ongoing coronavirus pandemic. Bellator have moved to postpone all planned events and compensated it’s fighters and staff in the meantime.

“I like how Bellator MMA was up front with the athletes and communicated clearly that there would be a break from competition.  This allowed the athletes to focus on their family and proceed by the social distancing guidelines, instead of having them mentally, physically, and financially preparing for a fight that inevitably was going to be canceled or postponed. I like seeing Scott Coker focus on the health of the athlete and it gives me confidence that when competition returns Bellator MMA will have a system in place to ensure fighter safety.”

Do you agree with Cris Cyborg? Should the UFC notify fighters of event changes before telling the media?