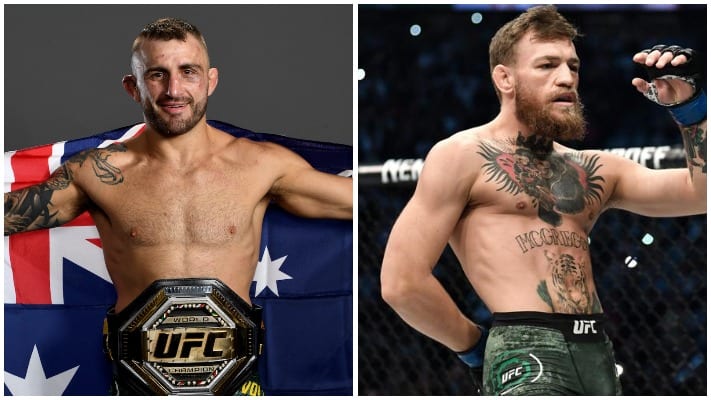 Alexander Volkanovski has had his say on Conor McGregor’s recent social media antics.

The former dual-weight UFC champion has been going after everyone as he recovers from the broken leg he suffered in the first round of his trilogy fight with Dustin Poirier at UFC 264.

‘The Diamond’, Daniel Cormier, Michael Bisping, and Anthony Smith have been the main targets of McGregor’s abuse.

Volankovski has been watching on as he prepares to defend the featherweight title once held by McGregor on September 26.

Ahead of that fight, Volkanovski spoke to LowKickMMA about a variety of topics, including McGregor’s recent social media activity.

“I guess it’s not that surprising,” Volkanovski said. “Some of the stuff that he says it is surprising. It’s funny how after so many years he can still make you be like, ‘Woah, where’s he going with this?’ I guess people are just going to do what they want (to) stay in the headlines. While you’re injured you can’t do anything active to stay in the headlines, so you might as well get those Twitter hands going and whatnot.”

‘The Great’ is unsure if McGregor is angling for a fourth fight with Poirier or is simply losing his cool before deleting posts he comes to regret.

“Whether he’s trying to build that fourth fight with Poirier again, he’s always thinking ahead but I don’t know,” Volkanovski said. “I don’t know if there’s a bit of both. Thinking ahead and then obviously he’s a bit hot-headed sometimes, that (could be) taking over at the same time, that’s why he’s tweeting and deleting.

Volkanovski thinks McGregor believes he can say whatever he wants on social media because ultimately people forget, and it never seems to impact his pay-per-view numbers in a negative way.

“It’s hard to get a read on him to be honest,” Volkanovski said. “It’s hard to get a read on him because I think, he’s got away with so much that’s why he tends to push boundaries because he knows that will get the headlines. For some reason, people eventually accept that anyway, he’s done crazy things and people forget about them, his pay-per-views are still through the roof. So, when things like that are happening maybe you do feel untouchable, invincible and you feel like you can do whatever you want. Maybe that is what is happening. I don’t know, but there’s some crazy things that he says that sort of blows me up but at the same time I guess you can expect it to happen, in the coming months as well.”

Do you agree with Alexander Volkanovski on Conor McGregor’s social media antics?