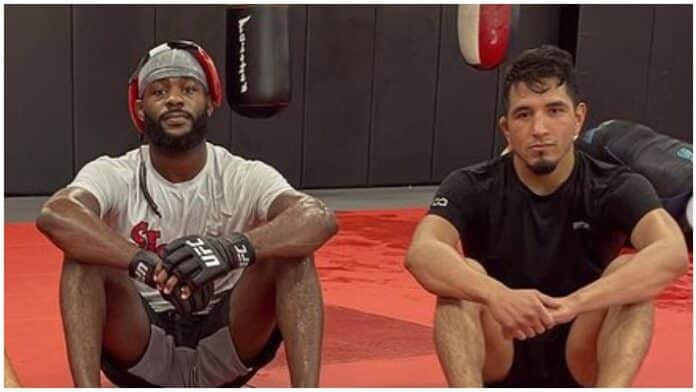 Adrian Yanez is “100 percent” confident that Aljamain Sterling will return to the Octagon in the near future after recently training with the UFC bantamweight champion.

Yanez, one of the fastest rising stars at 135lbs, traveled to New York to get some mat time in with ‘The Funk Master’ and a bunch of other elite-level fighters who train under Matt Serra and Ray Longo.

“It was really fun, man,” Yanez told LowKickMMA of his time training in New York. “Like, I learned a lot from Aljo (Aljamain Sterling) just from being out there and just from seeing all the high-level guys that were over there. It was really phenomenal to see and just being able to pick apart and see what I can add to my game and also what I add to my training camp.”

Sterling was due to make the first defence of his bantamweight strap at UFC 267 on October 30. However, lingering issues relating to a recent neck surgery forced the champion out of his eagerly-anticipated rematch with Petr Yan who will now face Cory Sandhagen for an interim title later this month.

During a recent appearance on The MMA Hour, TJ Dillashaw cast doubt on Sterling’s fighting future. The former two-time bantamweight champion expressed his view that Sterling will not be able to fight again after his neck surgery and also said the 32-year-old is simply holding onto the title for as long as he can before announcing his inevitable retirement.

Yanez was quick to pour cold water on Dillashaw’s theory after sparring with the champ.

“Absolutely, 100 percent,” Yanez said when asked if he expects Sterling to fight again. “He’s definitely going to be back. Honestly, I am really health first and just to be able to see him and how important he treats everything for himself, it’s really good. I was really impressed.”

“He is definitely going to be back,” Yanez added. “Even after just moving around with him on the Wednesday. He told me his schedule and how he was doing it, how everything kind of planned out. Like, the week before, he did almost no training, kind of took the time just resting, went with the doctors, and all that stuff. He literally almost didn’t train for about a week and then he comes back, and he feels better. And whenever I moved around with him, he’s like (nods). Oh, he’s feeling a lot better. Just the fact that the UFC and the doctors didn’t let him fight. Honestly, it is better for him to take the time off anyway ‘cause it’s your neck, man. You’ve got the nerves, man. It can be really bad if you don’t take care of yourself.”

Do you think Adrian Yanez is right? Is Aljamain Sterling definitely going to return to the Octagon?