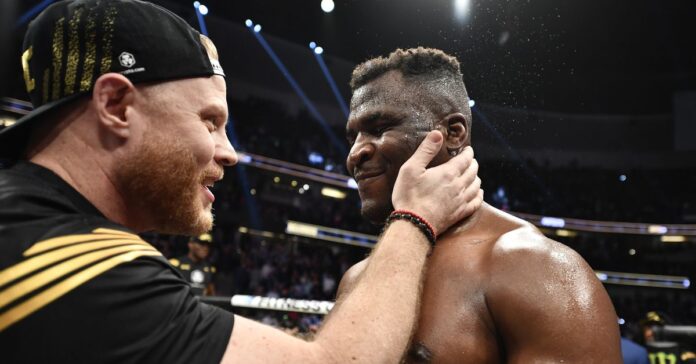 Francis Ngannou’s coach, Eric Nicksick has provided an update on the UFC heavyweight champ’s road to recovery from the injuries sustained in the buildup to and during his fight with Ciryl Gane in early 2022.

Featuring on the latest episode of What The Heck, hosted by Mike Heck, Eric Nicksick made it clear that he feels a December return for the champion isn’t “a realistic timeline” based on where he is in his rehab after the surgery he had to repair a tear in his MCL as well as damage to his ACL.

The Cameroon native has been back home for the last month, but once he returns to the U.S., the UFC performance institute will re-evaluate him and provide an update on his knee, stated Eric Nicksick.

The big question on everyone’s mind, along with when we’ll see the heavyweight champ return to the octagon, is who we’ll see him against. UFC president Dana White has proposed the idea of an interim title fight with Jon Jones and Stipe Miocic, the winner of course would welcome Ngannou back from his injury.

Nicksick told MMA Fighting that a fight with Jones “makes the most sense” and that it’s “the fight we all want.”

A fight with the former light heavyweight champion was in the negotiation stage following Ngannou’s win over then-champion, Stipe Miocic. Talks of the two meeting in the octagon ended just as quickly as they started due to contractual issues between the UFC and Jones.

Jones hasn’t fought since February of 2020 after vacating his light heavyweight belt to make a move up to heavyweight.

Considering how big this fight will be, “what’s another 2 to 3 months?” explained Eric Nicksick later calling the potential matchup “a super fight”, a statement that not too many people can disagree with.

The timeline of Ngannou’s injury has the heavyweight division held up with Jones waiting for either an immediate title shot or a fight for an interim belt against Miocic. At the same time, a fight with top contenders Ciryl Gane and Tai Tuivasa is happening this weekend in Paris, with the winner no doubt hoping for a shot at a UFC title.

With a win on Saturday, both Gane and Tuivasa have a solid argument to be next in line for a title shot. If Ngannou doesn’t return until January or February against Jones, not even considering the damage that could be taken during their fight, then that would leave the winner of this weekend’s bout with a long layover until their chance to fight for UFC gold.

When do you think MMA fans will see Francis Ngannou and Eric Nicksick again?