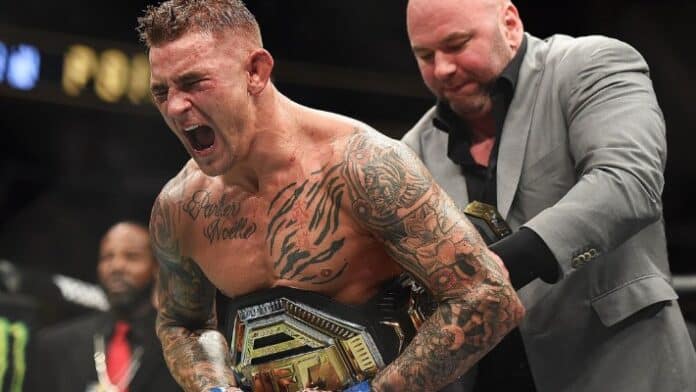 Dustin Poirier‘s coach knows a fight between his student and Nate Diaz would be massive, but wants to see Poirier get the lightweight title first.

Many assume Poirier will be granted a title opportunity in his next outing. He’s been on fire as of late, winning a ‘Fight of the Year’ contender against Dan Hooker before picking up a pair of wins over Conor McGregor. Though his latest victory came under less than ideal circumstances, he is still widely viewed as the number-one contender to the lightweight championship.

In a recent interview with MyMMANews, Mike Brown, one of the top coaches at American Top Team, gave his thoughts about what is next for ‘The Diamond’ (BJPenn.com).

“I’m assuming the title will probably be next, who knows,” Brown said. “I see there’s some talks maybe potentially [about] a Nate Diaz fight. I’m sure that would do giant numbers. They were scheduled to fight before, it kind of fell through. But that would be monster. Something everybody would want to see. Maybe they could do it at welterweight, nobody’s got to cut weight, kind of a fun fight for the fans. But I think probably first, business is winning the undisputed lightweight title.”

Charles Oliveira claimed the lightweight title in his last fight, stopping Michael Chandler in the second round at UFC 262. It is widely believed that ‘Do Bronx’ would have faced Poirier at that event if the latter had not decided to partake in the trilogy fight against McGregor instead. Brown gave his thoughts on what a fight between the two men would look like.

“Like every Poirier fight, it’s gonna be super exciting, a lot of violence, a lot of pressure, and probably a D.P. finish,” he said.

On top of potential bouts against Diaz and Oliveira, there’s another fight that could possibly be on the horizon. Poirier and McGregor have continued their banter on social media since their last fight, with ‘The Notorious’ claiming that the only reason Poirier picked up the victory was due to the broken leg McGregor suffered during the fight. He has even gone so far as to call Poirier’s victory “illegitimate”, and there have been cries to make a fourth bout between the two. Though Brown wouldn’t rule the possibility out, he said he doesn’t see it happening anytime soon.

“Who knows, right? It’s all about entertainment, what people want to see,” Brown said. “Money talks. But I mean, he’s gonna be out for a while so I don’t anticipate it anytime soon and I think there’s some other things that Dustin wants to take care of first. I would never say never to anything but I don’t see it in the near future.”

Who do you think is next for Dustin Poirier? Let us know!