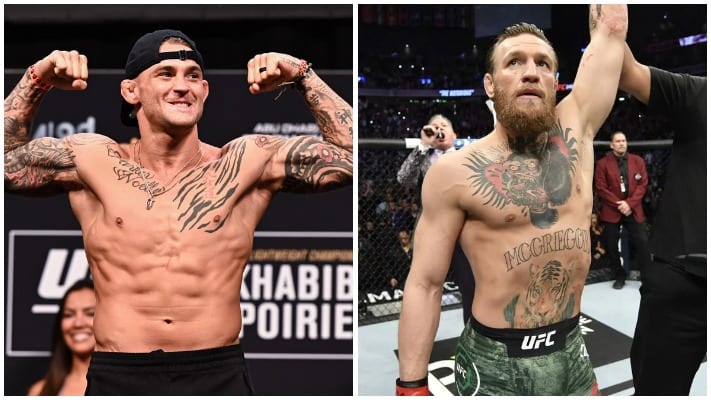 During the interview, Poirier reveled some interesting information about his career and where he wants it to go.

He first revealed that the UFC did offer him a title shot against Charles Oliveira at UFC 262, but he turned it down for the trilogy fight with McGregor instead.

“The whole thing with my tweet after I said that, my apology was more for me because I felt like I attached my foundation, something me and my wife have worked so hard to get where it’s at to something negative. We don’t want that dark cloud hanging above it. I still stand by it. I didn’t say anything untrue.”

Poirier then comments on McGregor’s recent donation to the Boys & Girls Club in Louisiana.

“Conor has donated 500K to the Boys & Girls Club and that is so incredible because at the end of the day helping the community, helping people in need was the mission and goal from the jump. At the end of the day charity wins. Conor didn’t donate it to my charity but it’s not my money, it’s the peoples money. It wasn’t a slap in the face, it was a high five.”

It is nice to see Poirier take the high road with his comments. With all the negativity surrounding this fight now, it is good to see him take it all in stride.

He did provide additional information on his preparation for the fight and even offered a prediction.

“I’m going to bust my ass and be prepared to go in their and make things happen.”

“I am going to stop Conor again. July 10th I am going to get my hand raised and finish Conor McGregor again.”

Who do you think wins the trilogy fight between Dustin Poirier and Conor McGregor?