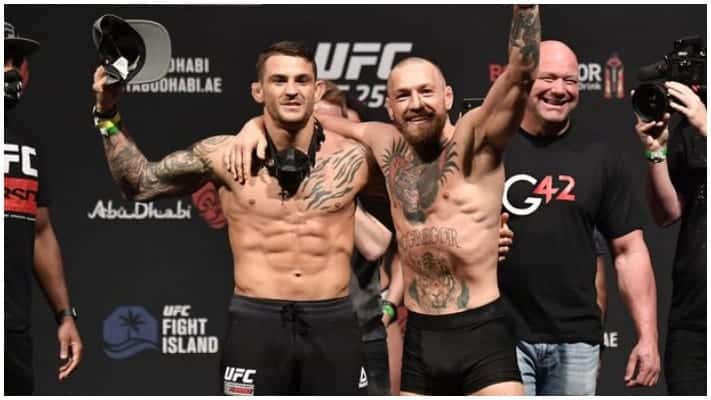 Dustin Poirier has revealed that Conor McGregor failed to deliver the $500,000 he pledged to The Good Fight Foundation.

In the build-up to UFC 257, Poirier and McGregor kept things friendly.

‘The Diamond’ went on to defeat McGregor in impressive fashion. Poirier wrestled early before hammering home calf kicks and showing off his slick boxing to become the first man to KO McGregor in MMA.

A trilogy fight is now set for July 10. Ahead of the bout ‘Mystic Mac’ made a very specific prediction.

“The prediction is in! I’m going to win the trilogy fight via A Front Kick to the nose,” McGregor wrote on Instagram. “Round number 4. His Nose needs straightenin and I’m Rhinoplasty”

A few days later and Poirier has responded to the prediction while also revealing McGregor failed to deliver on his $500,000 pledge to The Good Fight Foundation.

“That’s a fun prediction! @TheNotoriousMMA you also predicted a donation to my foundation and you and your team stopped responding after the fight in January,” Poirier wrote on Twitter. “See you soon. July 10th Paid In Full!”

Are you surprised to hear Conor McGregor failed to donate to the charity led by Dustin Poirier?