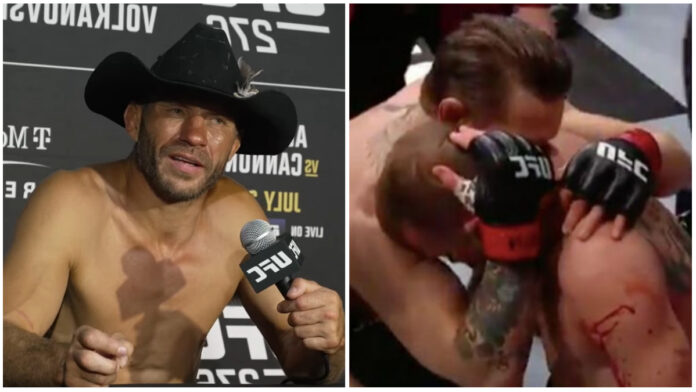 Donald Cerrone called it a career after his latest outing at UFC 276.

This past Saturday, Donald Cerrone took on Jim Miller during the International Fight Week on the UFC 276 card at the T-Mobile Arena in Paradise, NV. Cerrone has been a mainstay in the sport since before its rise in popular culture, going as far back as the WEC days. The ever-reliant company man for the UFC called an end to a 16-year-long career after his latest loss.

Donald Cerrone reveals when he knew it was time to retire

During the post-fight press conference, Cerrone revealed when he first realized he was getting close to the finish line. ‘Cowboy’ pointed back to his fight with Conor McGregor in January 2020 saying he didn’t enjoy the preparations anymore.

“Before I fought McGregor, I knew it was close,” Cerrone said. “Then I did the McGregor fight and then I took another fight, just going through emotions. I didn’t enjoy it, didn’t love it.

“I knew time was soon and I just had to pick the right time. Coming in, I took a lot of time off and called my agent just to get a fight. I just knew this was going to be the last one.”

‘Cowboy’ regrets not doing it sooner

Cerrone spoke about how fighters tend to continue competing long after it’s time to hang up the gloves. He would look at other athletes in a similar position and understand how different his situation may be compared to others.

According to ‘Cowboy’, if there’s one thing he wishes he could’ve done in his illustrious career, it’s to have retired sooner than UFC 276.

“The only regret I could say I have is I didn’t do this sooner.”