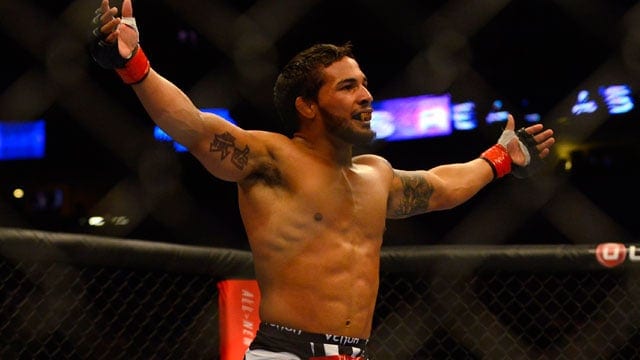 UFC featherweight Dennis Bermudez will look to keep his hot streak alive at UFC 180, as he is set to face former title contender Ricardo Lamas on the main card. “The Menace” is riding a seven-fight spree in the talent deep division, of which he holds a possibly harsh number eight ranking. He was recently bumped down a spot when fellow 145-pounder Conor McGregor squashed Dustin Poirier at UFC 178.

Speaking with our friends over at Submission Radio, Bermudez discussed McGregor’s overnight stardom and the talk of a potential title shot at Jose Aldo for “The Notorious”:

“I mean it’s bullshit yeah, but I mean I’m just trying to stick with what I’m good at, you know. And right know it’s focusing on the guy in front of me and just worrying about this one win. If I keep winning, the belt is gonna land right across my lap. And I’ve been going about this (being polite) technique and it’s not really working for me you know, and I’m still over here fighting on co-co-main events and stuff like that, but I mean it will come. But I’m working on getting a little bit more vocal.”

After Dana White said that McGregor could get a crack at the title after UFC 179, eyebrows were raised. There’s no doubt that the Irish phenom has character and raw talent, but in terms of active UFC streaks he is a few down the line. Bermudez has the longest win streak in the division (7) and is tied third overall in the UFC with “Mighty Mouse” and Raphael Assuncao, only behind Jon Jones (11) and Chris Weidman (8). “The Menace” continued:

“That put’s me up there with Jon Jones and Chris Weidman and the highest win streaks of the UFC, and both of those guys are champions so why not let me join them? I’ll be a champion with those guys. Yeah to answer your question, yeah it’s annoying, but I mean fuck him, you know I don’t give a shit. I’ll get my shot. Whether it’s beating him up and then getting the shot, or I get the shot right away.”

McGregor’s style is somewhat smooth and devastating at the same time. The advantage that “The Notorious” gives himself outside the octagon is his epic trash talk. McGregor does his best to get inside his opponent’s mind, but Bermudez feels like he would be immune to those games:

“Not a chance. You know I’ve thought about it a little bit, because the day will come where we have to square up. I’ll probably just smile in his face and just be a gentleman, you know and just kinda kill him with kindness; and when time comes to go in the ring, he’s gonna kind of be like ‘oh man I can’t get this guy. How am I actually going to like get to this guy’, you know? Where I’ll be unfazed by that, and I mean if someone was talking to me in the ring and trying to clown me in the ring; like I’m gonna put my head in the middle of your chest and fucking give you some air miles to the other side of the cage.”

Is Dennis Bermudez being dealt a rough hand by having to fight again before being granted a title shot. On the same note, is Conor McGregor being boosted up the line too quickly? It pays to remember that Bermudez has only beaten one ranked fighter at this point too, Clay Guida. A win over Lamas at UFC 180 would likely seal the deal for “The Menace”, or at least it should.