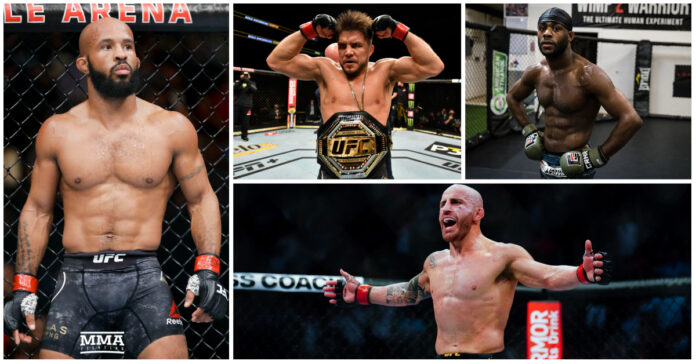 Former two-division UFC champion Henry Cejudo re-entered the USADA testing pool in April to solidify his return to competition. Cejudo announced that he was hanging up the gloves after his win over Dominick Cruz in May 2020. While he does not have a confirmed opponent yet, he has been rallying for a shot at either of the two champions at bantamweight and featherweight.

Although Cejudo didn’t compete at featherweight, Demetrious Johnson believes he has what it takes to dethrone Alex Volkanovski or the lighter Sterling.

In an interview with MMA Fighting, ‘The Mighty Mouse’ shared his thoughts on Cejudo as a fighter and heaped praises on the only person to have won an Olympic Gold and a UFC championship.

“He’s intelligent, he’s an athlete – I mean, he’s done something I haven’t done,” Johnson said. “You know, he’s won the world championship at flyweight and bantamweight, and he’s defended the flyweight title and the bantamweight title, right?

“Typically guys when they do that, Conor [McGregor] has done it, but he never defended any of those belts. He’s won it, then [won] one after, and then he got lost, right? That’s one thing I think Henry Cejudo has that people should show respect to the man. I respect him.”

Johnson talked about how he sees a matchup between ‘Triple C’ and ‘Funk Master’ playing out.

“If he was to fight Aljamain Sterling, I think he poses a lot of problems to Aljamain Sterling because, one, his wrestling is legit, his hands are legit, and Henry Cejudo, he’s a gamer,” Johnson said. “Like, he’ll go out there and he’s gonna push the pace and try to win the fight. Obviously, right now Henry Cejudo’s got that dad bod, so he’s gonna have to shred all that baby weight, and I’m sure he can do it. It’s all about does the athlete want to do it, in my opinion.”

Johnson believes Alex Volkanovski will be a tougher matchup

‘The Great’ is currently on a 21-fight win streak and has gone unbeaten in the UFC in 11 fights against competition like Jose Aldo, Max Holloway, Chad Mendes, and Brian Ortega.

As for a potential showdown against the reigning king of 145 lbs, Johnson believes Cejudo would have a harder time.

“I think [fighting for the featherweight title] is gonna be a harder thing to do because Volkanovski is, I think, the bigger guy, and Volkanovski has been more active. And I think the weight discrepancy is going to be there for Volkanovski, right? Do I think Henry Cejudo has the talent and skillset and the mindset to beat Volkanovski? Absolutely, it’s a fight, but Volkanovski has been active, he’s been fighting killers. He’s fought Max Holloway two times.”

Johnson compared Volkanovski to Cejudo and said that they are identical in their approach to fighting.

“But now, when you see him fight, when he fought Max Holloway both times and when he fought Brian Ortega and when he just fought ‘Korean Zombie,’ you saw an athlete also become a martial artist and also sticking to executing a perfect gameplan.

“So, that’s the biggest thing I think that Henry Cejudo is going to have to battle. He’s going to gave to battle pretty much an identical version of him, in my opinion.”

Alex Volkanovski is scheduled to fight Max Holloway for a third time on July 2 at UFC 276.

Do you agree with Demetrious Johnson on Henry Cejudo dethroning Alex Volkanovski or Aljamain Sterling?