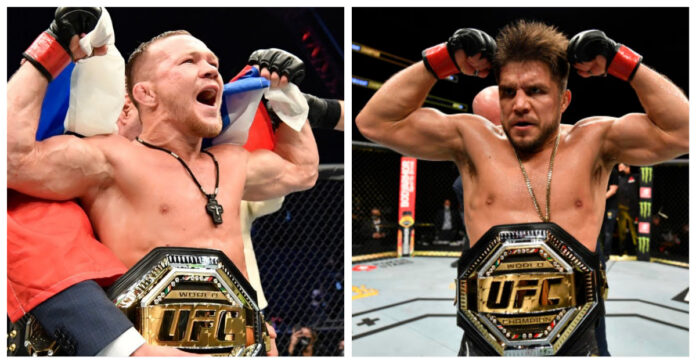 Henry Cejudo has his eyes set on Aljamain Sterling and refuses to consider Petr Yan for his next fight.

Former UFC two-division champion Henry Cejudo wants a shot at the bantamweight gold. Having retired after his most recent outing against Dominick Cruz in May 2020, ‘The Messenger’ has remained out of action for more than two years. Cejudo managed to keep himself relevant as he coached other athletes at the highest level.

Cejudo had been talking about coming back to fighting ever since retirement but made it official after re-entering the USADA testing pool. He shared a photo from a meeting with UFC matchmakers Hunter Campbell and Sean Shelby teasing his return to be against the reigning UFC bantamweight champion Aljamain Sterling.

Henry Cejudo is only interested in a title shot

Petr Yan, a former interim title holder, was considered to be the top dog in the division before Sterling handed him a second defeat and unified the titles. After Yan heard about ‘Triple C’ targeting Sterling for his next bout, he took to Twitter to fire shots at Cejudo alleging that he’s ducking him.

“Hey Henry Cejudo, you talked a lot when you were ‘retired’. Now it’s time to back it up!”

Cejudo wasted no time in letting Yan know that he is not interested in competing against contenders.

“Only if you had the gold I would have loved to have buried You should go back to Dagestan and learned more wrestling because you got outwrestled by Division III all American. That wouldn’t be smart of you taking an Olympic champ after that lose. I’m after Gold hoe #Bendthekne“

In a follow-up tweet, Yan responded to Cejudo by reinforcing his argument.

“The truth is you retired the day I became No. 1 contender and unretired on the same day I ceased to be the champion. Now you are ducking me again only proving those facts.”

Sterling was matched up to face TJ Dillashaw in his next fight. However, his intentions to pen a new deal with an increase in pay might throw a wrench in Cejudo’s plans.