LowKickMMA.com
Home UFC News Deiveson Figueiredo On Cejudo & Johnson: ‘I Would Catch Them Both’ 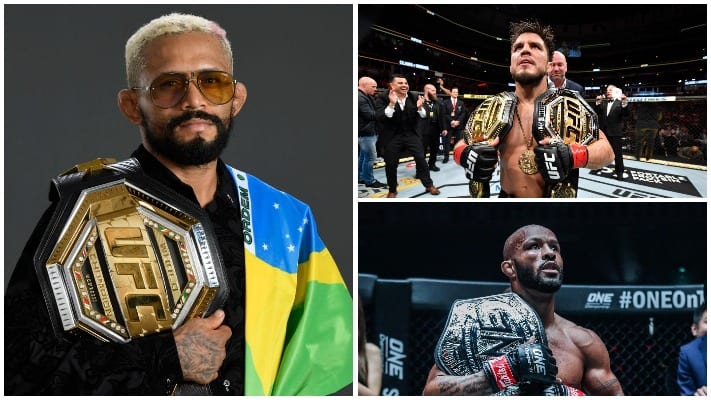 Deiveson Figueiredo wants all contenders to know that he will finish them, even if they are former UFC champions like Henry Cejudo and Demetrius Johnson.

Figueiredo returns to the octagon next month for UFC 263 in a highly anticipated rematch with Brandon Moreno for the flyweight title. As he prepares for the return, he’s made it clear that he is thinking beyond the rematch.

AG Fight recently interviewed the reigning UFC flyweight champion from his native Brazil, opening up about what his future may hold after UFC 263 and his thoughts on Demetrius Johnson’s loss to Adriano Moraes in One Championship. (H/T BJPenn.com)

“I think that very soon he (Cejudo) will be coming back (to fight). Maybe not at flyweight, which is what I fight for. But maybe at bantamweight or featherweight, he’ll be back. I think he doesn’t have the size for a featherweight, but I hope my first fight at bantamweight is with him. May he accept to fight with me. And that Dana agrees to pay us a good purse. May we face each other. And you can be sure that it will be the ‘Fight of the Night,” Figueiredo said.

On Johnson, Figueiredo added, “surprised at (Demetrious Johnson‘s defeat at ONE). He’s a guy who has a very versatile game. You don’t know if it will change or put you down. And the Brazilian played an excellent game. He moved in front of him and gave him no opportunity to be put down. And the hand came in, right. He put his hand in and unplugged the plug. He disconnected the ‘Minnie Mouse’ from the socket,”

With many fighters looking to book super fights, the idea of a Figueiredo versus Cejudo matchup is indeed intriguing. However, for now, this matchup is purely hypothetical as Figueiredo has his hands full with Moreno. Additionally, the UFC is yet to confirm a return for the former champ-champ Cejudo. Still, Figueiredo went on to give his take on his chances against either Cejudo or Johnson.

“(Henry) Cejudo would certainly be knocked out. And Demetrious Johnson would be finished. I would catch them both,” the flyweight champion added.