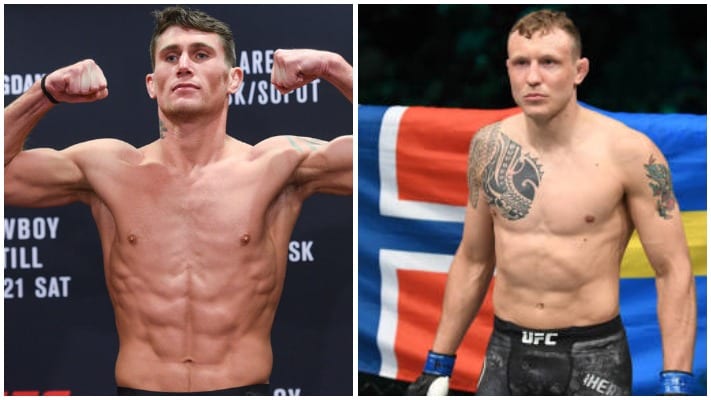 Middleweight contenders Darren Till and Jack Hermansson will square off in the main event match-up on December 5 according to Brett Okamoto of ESPN who broke the news on social media earlier tonight, he wrote.

As stated above Till is currently healing up after suffering a knee injury during his most recent fight – a unanimous decision loss to former middleweight champion Robert Whittaker.

Prior to that, the Englishman enjoyed a successful middleweight debut beating one-time title challenger Kelvin Gastelum by split decision, snapping his own two-fight losing skid which saw his previously impressive welterweight run come to an end.

Despite recent losses Till remains confident he will become UFC champion sooner rather than later.

“When people give excuses over little things in life and the weight cuts and whatever it just doesn’t cohere with me. You either win a fight or you lose a fight,” Till said. “There is no if, buts, what’s. Yeah, if my knee was a little bit better maybe things would’ve been a bit different but it was a three-two fight for him or three-two fight for me, so I haven’t left that fight thinking anything. He was the former champ. A few more fights mate and I am going to be the champion.”

Hermansson got back to winning ways last time out with a quick submission victory over Gastelum. Before that, he was knocked out by Jared Cannonier at UFC Copenhagen who will now face Whittaker in what appears to be a number one contender fight. The former Cage Warriors champion holds several high profile wins over the likes over Ronaldo ‘Jacare’ Souza, David Branch and Thales Leites.

Who will win on December 5? Darren Till or Jack Hermansson?