LowKickMMA.com
Home UFC News Darren Till Thinks He Will Become Champion In ‘A Few More Fights’ 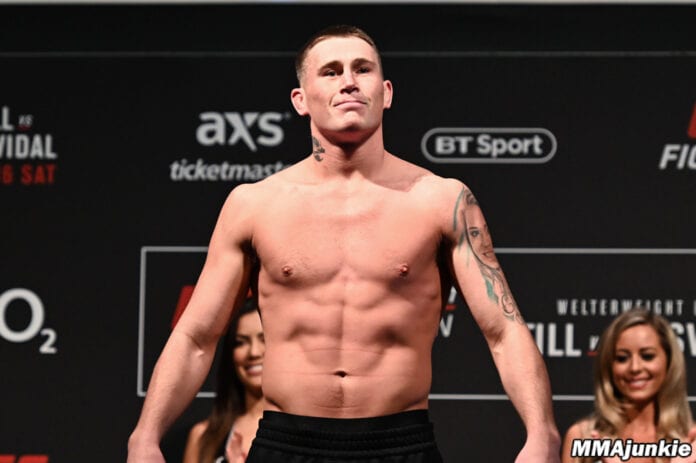 Darren Till believes he will become the UFC middleweight champion and only needs “a few more fights” in order to make that happen. Till fell short against the former 185lb king, Robert Whittaker at UFC Fight Island 3 on July 25. The two men went back and forth over five rounds on Yas Island, Abu Dhabi with Whittaker ultimately getting the decision on the judge’s scorecards.

Till took time out to reflect on his defeat while speaking with ESPN’s Ariel Helwani. The 27-year-old seemed in good spirits despite the loss, said he had no excuses, and remains confident of capturing UFC gold sooner rather than later.

“When people give excuses over little things in life and the weight cuts and whatever it just doesn’t cohere with me. You either win a fight or you lose a fight,” Till said. “There is no if, buts, what’s. Yeah, if my knee was a little bit better maybe things would’ve been a bit different but it was a three-two fight for him or three-two fight for me, so I haven’t left that fight thinking anything. He was the former champ. A few more fights mate and I am going to be the champion.”

Till went on to explain how he draws inspiration from hearing Helwani and Daniel Cormier speak about the greatest fighters in the sport and says he one day hopes to be mentioned in the GOAT conversation, he said.

“You know when you’re doing your chats with DC and he’s calling Khabib the GOAT and GSP. I love seeing that because it makes me thrive to one day have my name mentioned like that. People can watch this now and be like ‘yeah, whatever Till’. And people will be like ‘yeah Till is definitely going to be a GOAT’. It’s just what I set out to do Ariel and step by step I’m proving it. I’m a high-level fighter. I’m a high-level striker in MMA.”

Do you think Darren Till will become a UFC champion?