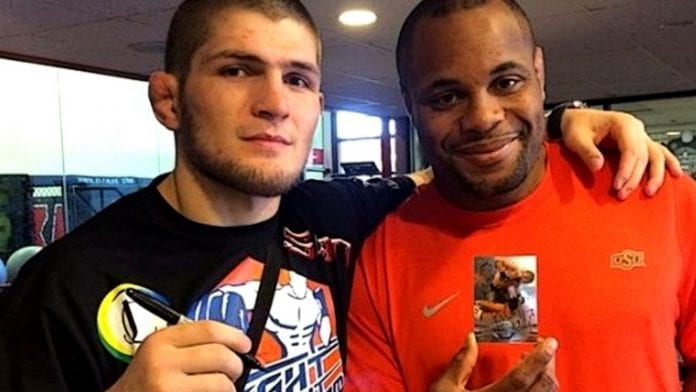 Former dual weight UFC champion Daniel Cormier is unsure if his teammate and friend Khabib Nurmagomedov will ever fight again after the passing of his father.

Abdulmanap Nurmagmedov died earlier this month aged 57 after suffering health complications stemming from contracting the coronavirus. Since then people have been speculating about if or when the lightweight champion will return to the cage.

His manager Ali Abdelaziz seems confident Khabib will face off against interim titleholder Justin Gaethje later this year but Cormier doubts that will happen.

“I don’t think he’s fighting this year, honestly,” Cormier said on DC & Helwani. “And it’s going to take a lot of strength from a very strong man for Khabib to be back in the Octagon, ever, I think.”

Cormier believes Nurmagomedov will have to muster up all his strength to return to fighting without his father. Even if he manages to do that ‘DC’ doubts the undefeated Russian will stick around for long, he said.

“I just know what Abdulmanap meant to him, I know that this was their journey together. I hope he fights, but I don’t know. Like I said, he’s going to have to muster up a lot of strength for an already strong person to go out there and do it. And if he does, I just don’t know how long he’ll be around. Maybe (Khabib Nurmagomedov) fights and honors his father with another massive and unbelievable performance. But, I look back at his fight in September and when he won, the way his dad reacted it almost like you saw the video when his dad reacts after he won against Dustin Poirier, and it was almost like his spirit was filled with joy watching his kid do that. I’m just happy they got to share that together.” (Transcribed by BJPENN.com)

Do you agree with Daniel Cormier? Is it doubtful we see Khabib Nuramgomedov fight this year?