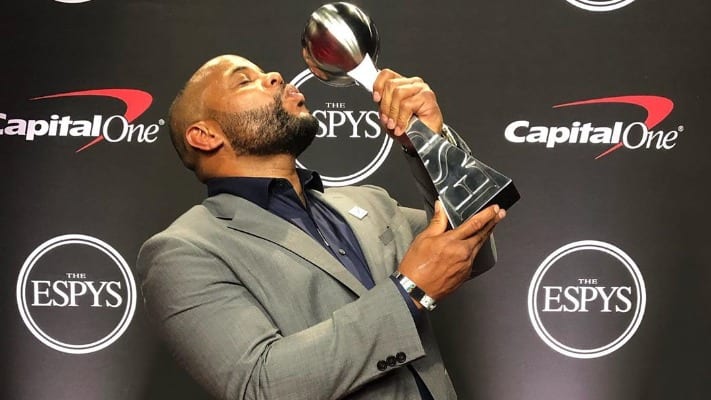 Daniel Cormier has made history for mixed martial arts (MMA) yet again.

Prior to this year, MMA fighters were lumped into the Best Fighter category along with boxers such as Floyd Mayweather Jr. and Manny Pacquiao. MMA fighters who have won the now-defunct Best Fighter award include Demetrious Johnson, Conor McGregor, and Ronda Rousey. All ESPY winners are determined via online fan voting.

Cormier took to his official Instagram page to comment on the honor. Here’s what he had to say:

“Tonight I won the ESPY for the best mma fighter, this is insane. I never would have thought I would ever get nominated for something like this. I have a great support system and they’re the reason things like this happen. Salina, you’re the glue that keeps this family rolling.

“To @crazybobcook and @dewaynezinkinyou guys have been the best managers I could ever ask for. @akajav the best Head Coach in the business, @rosendo_sanchez , @slikbxr,@camacho100, @leandrovbteam there is no staff in mma that compares.

“To my partners each and every one of you have built me from the ground up, special shout out to @officialcainvelasquez and @lukerockhold my brothers who have been there every step of the way. Cassandra and Heidi, all you do is recognized and appreciated greatly, I promise. All my competitors, I appreciate every one of you.

“The Jones rivalry has stood out above em all and have helped me to gain popularity that many people can’t imagine. And you the fans, you’ve loved me, cheered me and boo’d me, but you cared. It takes a village, I’m just a kid from the Northside of Lafayette, Louisiana. Amazing. Thank you all. I love you DC”

Cormier will defend his heavyweight title against Stipe Miocic at the upcoming UFC 241 pay-per-view (PPV) from the Honda Center in Anaheim, California on August 18.

What do you think about Cormier taking home the inaugural MMA ESPY award?