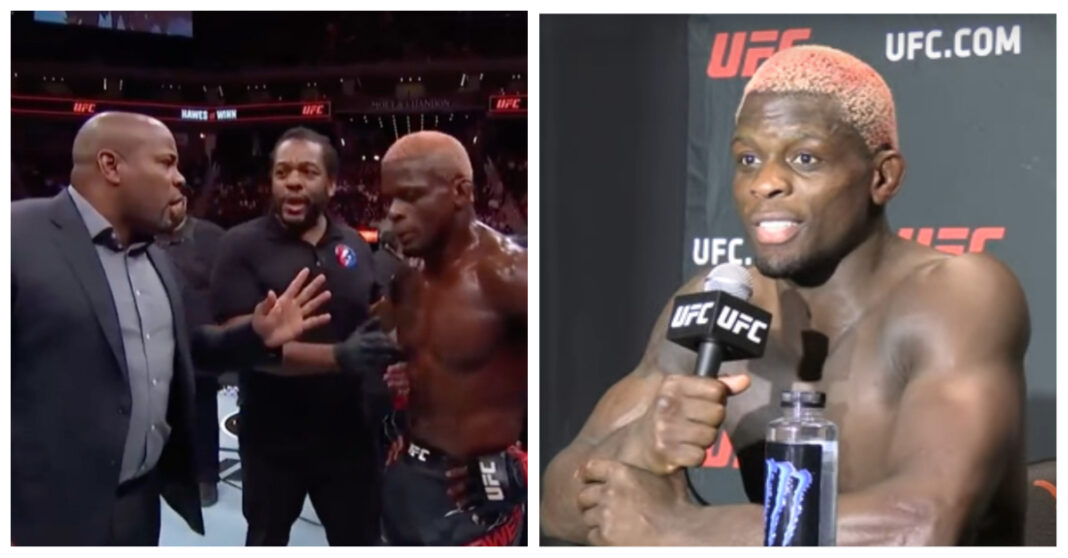 Phil Hawes has issued an apology to Daniel Cormier after the two men were involved in an altercation at UFC Austin.

This past Saturday, Phil Hawes took on Deron Winn in a middleweight contest at UFC Austin. Hawes put in a dominant performance to score a standing TKO victory in round two following multiple knockdowns and consecutive elbow strikes to slice his opponent. As good as a showing that was, Hawes proceeded to land himself in hot water with UFC Hall of Famer Daniel Cormier.

Phil Hawes apologizes to Daniel Cormier for the verbal altercation

Following the victory, a heated Hawes would initiate an argument with Cormier that would turn into a back-and-forth verbal altercation. Hawes had said that Cormier “picked the wrong pony”, claiming the former two-division champion was biased towards his teammate Winn for the competition.

Cormier was adamant that he did not pick any favorites and referee Herb Dean had to step in to separate the two. ‘DC’ urged Hawes to be more respectful and the New Jersey striker apologized to Cormier shortly after the spat.

During the post-fight press conference, Phil Hawes expanded on the events that had transpired and stated that it was simply a misunderstanding.

“Yeah, it was just a misunderstanding on my behalf,” Hawes said. “‘DC’ is such a role model to me, [he’s] a two-weight world champion, just a stellar dude. So it was just a miscommunication. Wrong place, wrong time.

The 33-year-old bounced back from a loss to Chris Curtis last November. Hawes looked commanding in the fight as he viciously pieced Winn apart. While the referee Dean called a stop to the contest late in the second round, some argued that the stoppage should’ve been called earlier given how many times Winn was wobbled in the first round.

When asked about whether he believes the fight should’ve been ended earlier, ‘No Hype’ said, “Herb Dean and the UFC have been here for a while and I think they know what they’re doing. I’m just going to let them do what they do, I’m going to do what I’m going to do. Fighting in there is tough enough I don’t want to do their jobs, I know what to do.”

Phil Hawes now stands with a record of four wins and a loss under the banner after making his way into the UFC through Dana White‘s Contender Series.