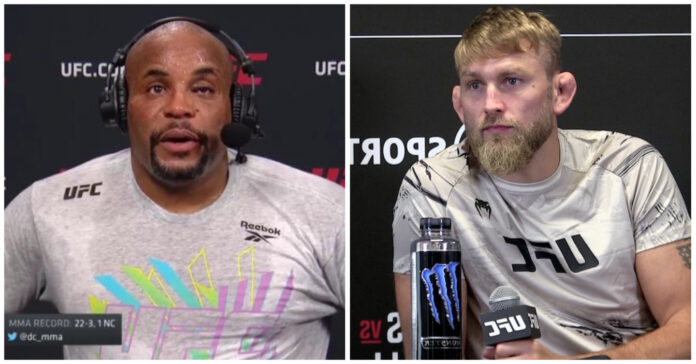 Daniel Cormier has urged Alexander Gustafsson to hang up the gloves after his latest loss.

This past Saturday, Gustafsson marked his return to action after a two-year hiatus against Nikita Krylov at UFC London. The O2 Arena didn’t get to see much of “The Mauler” inside the octagon as he got knocked out by Krylov in under 70 seconds.

“Gustafson is done. He needs to walk away, these shots are hard but he used to eat those. The chin is gone, walk away my friend. We all have expiration date. One of the best to not have had a title.”

Gustafsson has retired in the past

Cormier has experience competing with Gustafsson inside the cage. He narrowly managed to hold onto his light heavyweight strap with a split decision victory over the 35-year-old Swede at UFC 192 in Oct. 2015.

Gustafsson spent the majority of his career fighting at 205 lb and is a former three-time title challenger. He is widely regarded as one of the best mixed martial artists to never have won a UFC belt, a sentiment Cormier echoed as well in his message.

In his last ten, Gustafsson has only managed three wins from Sep. 2013. He has now dropped all four of his most recent outings with all of the defeats coming by a finish, either a knockout or submission.

Following a loss to Anthony Smith at a UFC Fight Night card in his homeland of Stockholm in Jun. 2019, Gustafsson indicated that he’d be hanging up the gloves only to return a year later against Fabricio Werdum. It’s unclear if his loss at UFC London will prompt him to retire from the sport or what he might be looking to achieve if he stays in it.