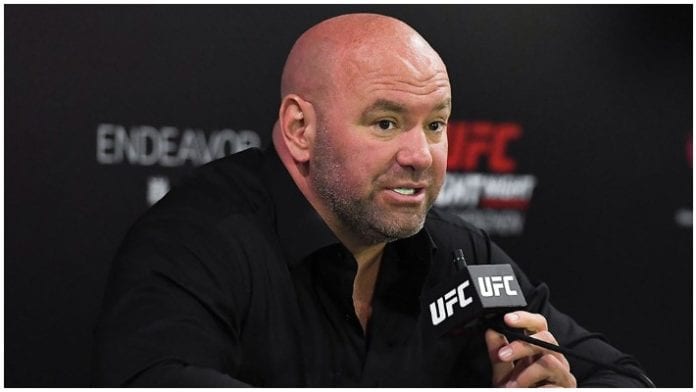 Cejudo retired from the sport last month after beating bantamweight great Dominick Cruz inside two rounds at UFC 249. ‘Triple C’ has since spoken publicly about how a fight for the featherweight title would likely tempt him to end his brief retirement.

“There would only be one fight that would really bring me back, that would really wake me up in the morning,” Cejudo said. “Other than Ryan Garcia, it would be Alexander Volkanovski, that overgrown midget. I would love to make him bend the knee because he’s already half way there.”

“I want a third title because I want to be different,” Cejudo said. “There’s a lot of champ-champs – obviously there’s only one ‘Triple C.’ There’s only one Olympic champ, flyweight champ and bantamweight champion of the world, but it’s just to cement it, go in the history books as the greatest mixed martial artist of all time.”

Speaking at the UFC on ESPN 11 post-fight press conference White shut down the possibility of Cejudo facing off against Volkanovski in the near future, he said.

“He’s retired. I just did another interview where people are asking me about other retired guys. These guys are retired. I’m not even thinking about any of those guys. They’re retired. There are so many kids right now that are here, that want to fight. Those are the people that I’m focused on.” (Transcribed by MMA Fighting)

The other fighter he is referring to is Conor McGregor who announced his retirement from the sport in the aftermath of UFC 250. ‘Notorious’ has been unhappy with the lack of fight options for him and is therefore unmotivated to continue competing.

Do you think Dana White is serious about not matching Henry Cejudo against Alexander Volkanovski?