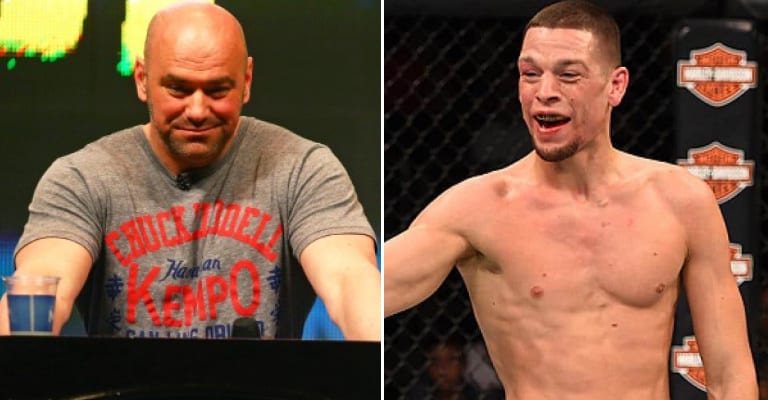 The mixed martial arts (MMA) world has been abuzz this week with the news that Nate Diaz will reportedly return to action at August’s UFC 227.

As usual, however, Dana White is cautioning us to pump the brakes.

According to the UFC president via Yahoo’s Kevin Iole, the news of Diaz is no news, because the promotion has been offering him a fight every three to four months as they have been since he faced Conor McGregor at UFC 202 in 2016, and it’s the same denial it’s always been:

Also, @danawhite didn’t seem to think much of the news about UFC negotiating a fight with Nate Diaz. “We offer him a fight every 3 or 4 months and have ever since his last fight. Nothing is going on.”

So White insists that Diaz isn’t coming back anytime soon and that there’s nothing to see here.

So interesting, in fact, that some would interpret that as an almost certain confirmation that Diaz will indeed be returning to the octagon sometime very soon. If and when he does, it would seem likely he’s matched up with one of a trio of top-ranked lightweights consisting of Kevin Lee, Dustin Poirier, and Eddie Alvarez.

All three of those fighters are elite lightweights who have won recent bouts by stoppage; Diaz hasn’t fought at lightweight since late 2015.

That may have Diaz rating as the underdog in all three match-ups due to his inactivity. To see how he matches up with all three, check out our match-up breakdowns involving Diaz right here.