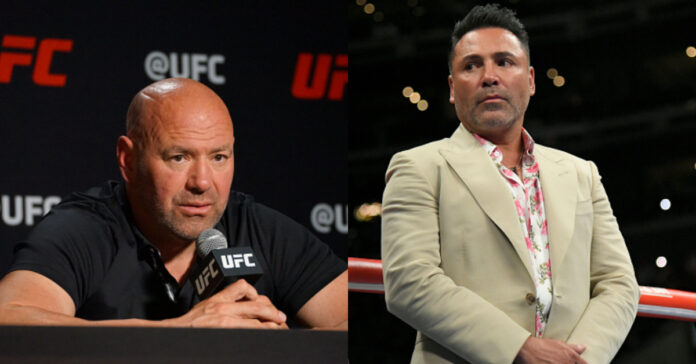 Over the years, it has become quite clear that there is no love lost between UFC President Dana White and retired boxing great-turned-promoter Oscar De La Hoya.

The rivalry seemed to come to a boiling point when White repeatedly called De La Hoya a “cokehead” following his booking of a trilogy bout with Chuck Liddell and Tito Ortiz under the Golden Boy Promotions label. Now the boxing legend is taking a different approach, offering up an apology to the UFC President during a June appearance on ‘The MMA Hour‘ with Ariel Helwani.

“There were some exchanges going back and forth with me and Dana, which I apologized for, 1000 percent.”

Oscar De La Hoya went on to discuss his desire to work with Dana White to build something together in the world of professional boxing.

“I would love to work with him,” De La Hoya said of White. “It would be a lot of fun and interesting to build something together, because boxing is a very fragmented sport, and what the Fertitta brothers did and what Dana did with the UFC is incredible.

During his ‘Actually Me‘ segment for GQ Sports, Dana White briefly addressed Oscar De La Hoya’s apology from June. The outspoken face of the UFC believes that the apology was sincere, but there has been far too much damage done to repair their once-friendly relationship.

“I feel like De La Hoya’s apology was sincere, but there’s no way he and I will ever be friends again.”

As for the possibility of Dana White getting involved in the boxing industry, the UFC President slammed the book shut on that, calling boxing a “corrupt, insane, f*cked up sport.”