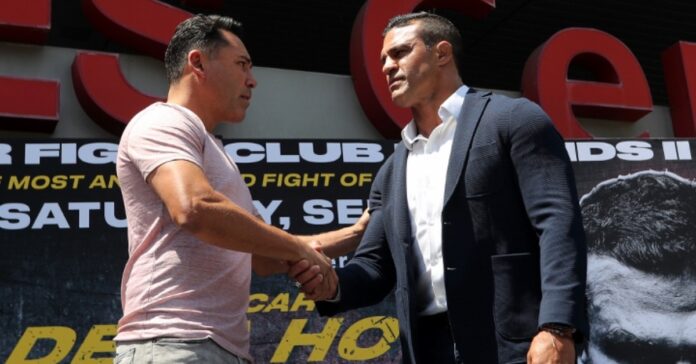 Former professional boxing world champion, Oscar De La Hoya has admitted that part of his is happy a scheduled fight against former UFC light heavyweight champion failed to come to fruition, revealing how he believes he “dodged a bullet” against the Brazilian.

De La Hoya, a former 11-time world champion across six separate weight classes and the founder of Golden Boy Promotions, was scheduled to fight former UFC champion, Belfort in September of last year in first an exhibition – and then a professional boxing match under the Triller Fight Club banner, however, the week prior to the event, De La Hoya was hospitalized after contracting COVID-19.

Remaining on the September 11. card in Hollywood, Florida – Belfort instead fought former cruiserweight champion, Evander Holyfield, landing a brutally one-sided opening round knockout win over the 59-year-old in less than two minutes of the first frame.

Reflecting on the failed venture to the squared circle against Rio de Janeiro native, Belfort, De La Hoya admitted that he likely dodged a bullet when the matchup failed to materialize.

“I’m glad I didn’t fight this monster of a fighter because he’s (Vitor Belfort) a big guy, and he knows what he’s doing,” Oscar De La Hoya told Ariel Helwani on The MMA Hour. “He’s talented. As old as we were, we can still throw punches. We saw it with Evander Holyfield where he knocked him out. I think I dodged a bullet there.”

De La Hoya further complimented Belfort’s ability inside the squared circle, as well as shutting the proverbial door firmly on his fighting future.