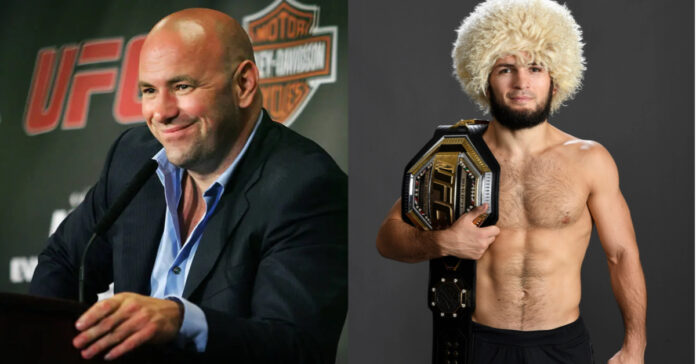 UFC’s President Dana White has recently revealed why he does not consider Khabib Nurmagomedov (29-0 MMA) the best UFC athlete of all time.

Nurmagomedov retired back in 2020 with an undefeated record, after defending his Lightweight belt for a third-consecutive time against Justin Gaethje.

‘The Eagle’ was also able to pick up impressive wins against Conor McGregor, Dustin Poirier and Rafael Dos Anjos during his UFC career – who are all former Champions. However, the main critique for most people regarding Khabib Nurmagomedov’s legacy is the level of fighters he faced before 2014.

During a recent interview with ‘GQ Sports’, Dana White was given the chance to set the record straight and explain why he doesn’t believe Nurmagomedov is not the all-time best.

“It’s so hard,” White uttered. “Obviously, he is talented enough. You know, who knows what he could accomplish? But he retired too early. I mean Jon Jones is probably gonna fight at heavyweight this year. You know, whatever you think about Jon, it’s hard not to call him a G.O.A.T.”

“Believe me when I tell you, I have tried to convince Khabib to come out of retirement. We will see what happens over the next couple of years. But I feel like he left in his prime. I mean, look at what he did to Justin Gaethje right before he retired.”

When asked to devise a list of whom his personal Top-5 fighters of all time are, Dana White was lost for space to put the former Lightweight Champion.

READ MORE:  Khamzat Chimaev Sends A Shot At Khabib Nurmagomedov: 'I Ate Too Much Tiramisu'

Jon Jones, Anderson Silva and Georges St-Pierre are usual suspects when it comes to this sort of list, but Kamaru Usman, Conor McGregor, and Ronda Rousey are the more surprising picks. Nevertheless, in regards to what they have done for the sport, you can understand the reasoning behind White’s choices.

Do you think Khabib Nurmagomedov is the UFC’s all-time best or does Dana White have a point, did Khabib retire too early?