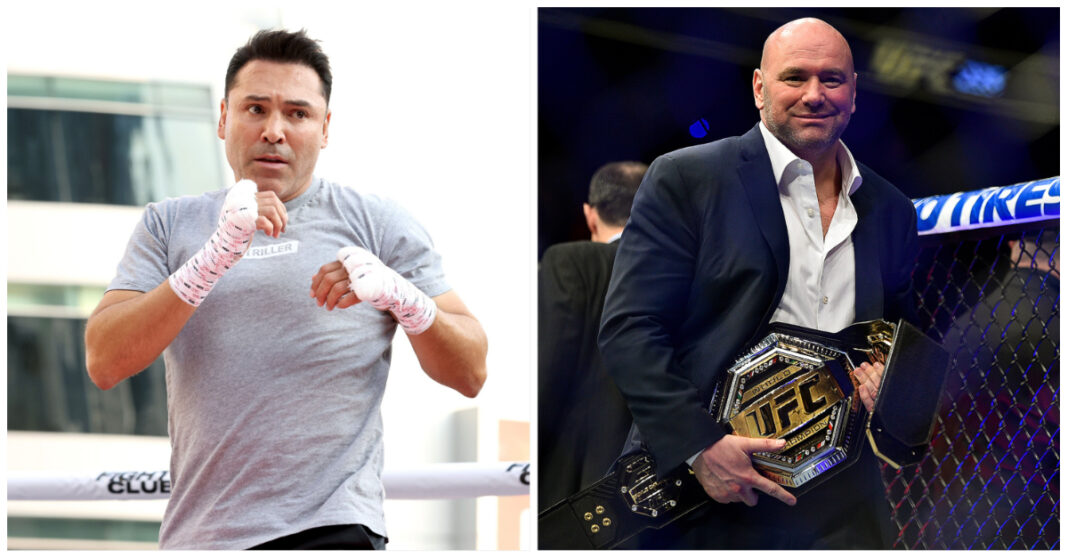 Former boxing world champion, Oscar De La Hoya says he would like to fix his relationship with UFC President, Dana White, in hopes of building something ‘special’

When Golden Boy promoter, Oscar De La Hoya made his MMA promotional debut in 2018 where he pitted bitter rivals Chuck Liddell and Tito Ortiz against one another, he was on the receiving end of huge backlash from the MMA community.

It would be a trilogy match between 48-year-old Liddell and 43-year-old Ortiz,  and the event was a disaster from the beginning. De La Hoya would host an awkward press conference in which he could not even pronounce Liddell’s name correctly.

The fight itself was uncomfortable to watch with fan-favorite Liddell being clearly past his best and would be stopped in the first round by Ortiz.

The catalyst for the ongoing feud between White, who is a close friend of Liddell, and De La Hoya seemed to start when Conor McGregor and Floyd Mayweather were set to square off back in 2017. De La Hoya was hugely critical of the event and of McGregor, White would reply to De La Hoya’s comments by tweeting “WTF?!? Is this guy snorting coke and drinking booze again??!?”

Since the initial Twitter feud and the proceeding MMA venture, the pair have shared some now-infamous exchanges on social media and on interviews, but now De La Hoya wants to turn over and new leaf and make amends with his rival.

Talking to ‘The MMA Hour’ De La Hoya expressed his interest in working with White “I would love to work with him,” De La Hoya began. “It would be a lot of fun and interesting to build something together.

“I’m more than happy and willing to listen and to create something special because I’m a businessman. I love to build a foundation that can be very, very special, and me and Dana coming together can be very special.”

What do you think? Should Oscar De La Hoya and Dana White work together?