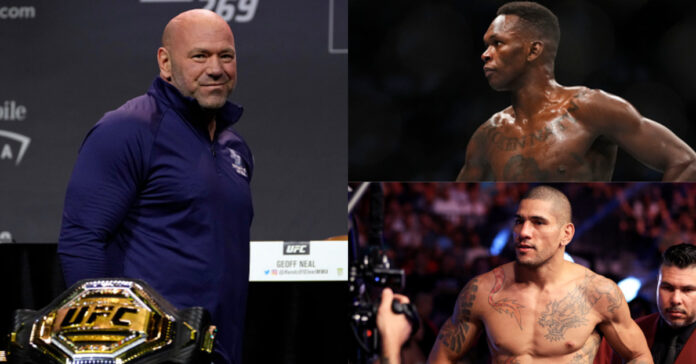 Israel Adesanya successfully defended his title against Jared Cannonier at UFC 276. Unfortunately, the fight failed to wow the thousands in attendance and the millions watching around the world.

Fans were reportedly flocking to the exits of the T-Mobile Arena while the main event was in full swing. ‘The Last Stylebender’ was once again criticized for his failure to live up to the hype he himself built for the title bout which has become a recurring theme in Adesanya’s title fights.

Speaking to the press following UFC Long Island on Saturday, Dana White was asked his thoughts on Israel Adesanya’s latest fight with Cannonier.

“He won,” said White. “I don’t know if it was the performance that he wanted to give or that he was selling leading into that fight. The other thing is, you know, I don’t think his opponent was very aggressive either. It takes two to make a great fight.”

White was quick to pivot to Adesanya’s next bout which will come against his former Glory kickboxing opponent Alex Pereira who scored a highlight reel first-round knockout over Sean Strickland on the same night that Adesanya defeated Cannonier in Las Vegas.

“It’s interesting. It won’t happen in the next fight. When you’re sitting here in my position, you can’t give too many guarantees. I can say ‘stylistically on paper this should be’, or you know, ‘we feel this is going to be’… I guarantee you. I absolutely positively guarantee you that the next fight that Israel Adesanya fights will be absolutely batsh*t nuts.”

Israel Adesanya’s Simple, But Effective Style May Not Work Against ‘Poatan’

In his last six bouts, Adesanya has five victories, only one by finish when he knocked out challenger Paulo Costa at UFC 253. Since then, ‘The Last Stylebender’ has one loss to then-light heavyweight champion Jan Blachowicz and three straight victories, all by decision.

Adesanya has adopted a style of keeping distance from his opponents, masterfully defending takedown attempts and counter-striking to outpoint his challengers. While there is no disputing that the method has been effective for the reigning middleweight world champion, it leaves many fans sitting on their hands rather than cheering for more.

This style could prove to be a mistake should he attempt to implement it in the highly anticipated showdown between himself and the newly ranked contender Alex Pereira. The two have squared off twice under the Glory of Heroes banner with ‘Poatan’ walking away the victor in both outings. In their second contest at Glory of Heroes 15, Pereira became the first, and to this day, the only man to knock out ‘The Last Stylebender’ with a crushing left.

Pereira will be looking to repeat history while Adesanya hopes to rewrite it when the two meet inside the Octagon for the first time.