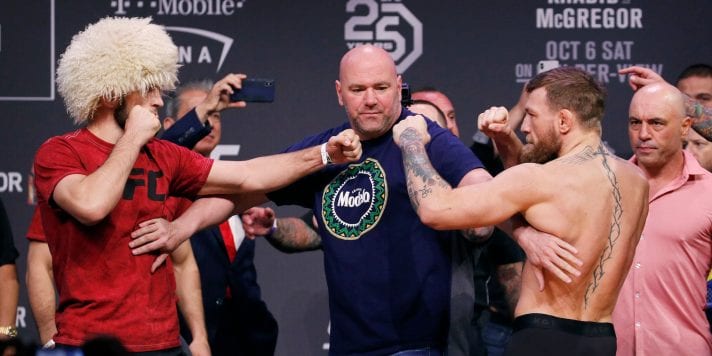 There is finally some movement in the lightweight division picture as Khabib Nurmagomedov vs. Dustin Poirier is official for UFC 242.

The title unification clash will take place September 7 in Abu Dhabi. The winner of that bout could defend their title against the winner of Tony Ferguson vs. Donald Cerrone which takes place this weekend at UFC 238.

But one fighter waiting in the wings is Conor McGregor, who according to UFC president Dana White, is currently training.

“He’s training,” White said on ESPN’s SportsCenter. “Obviously we’ll sit back and we’ll watch how this whole thing plays out with these fights and see where Conor fits in and what he wants to do next.”

McGregor’s last outing was a failed title attempt against Nurmagomedov at UFC 229 in October. The Irishman has since called for a rematch only to no avail.

However, White still believes it can happen.

“I could, I absolutely could [see a rematch happening],” White added. “Conor wants that fight. Conor wants the rematch with Khabib. All these guys have been fighting. Again, this thing’s going to play out this weekend and then Sept. 7 in Abu Dhabi, and then we’ll figure out what’s next for Conor.”

It would be extremely harsh for the winner of Ferguson vs. Cerrone not to get the next title shot, more so the former.

“El Cucuy” could make it 12 wins in a row with a win on Saturday and was unfairly stripped of his interim title due to injury. Cerrone, meanwhile, has won four of his last five, and a win over Ferguson should guarantee him a title shot.

However, money talks and despite being 2-2 in his last four UFC fights, there’s always a chance McGregor skips both of them.